page 24
Why is Opabinia, key animal in a new view of life, not a household name in all domiciles that care about the riddles of existence? In short, Harry Whittington and his colleagues have shown that most Burgess organisms do not belong to familiar groups, and that the creatures from this single quarry in British Columbia probably exceed, in anatomical range, the entire spectrum of invertebrate life in today's oceans. Some fifteen to twenty Burgess species cannot be allied with any known group, and should probably be classified as separate phyla . Magnify some of them beyond the few centimeters of their actual size, and you are on the set of a science-fiction film; one particularly arresting creature has been formally named Hallucigenia. For species that can be classified within known phyla, Burgess anatomy far exceeds the modern range. The Burgess Shale includes, for example, early representatives of all four major kinds of arthropods, the dominant animals on earth today-the trilobites (now extinct), the crustaceans (including lobsters, crabs, and shrimp), the chelicerates (including spiders and scorpions), and the uniramians (including insects). 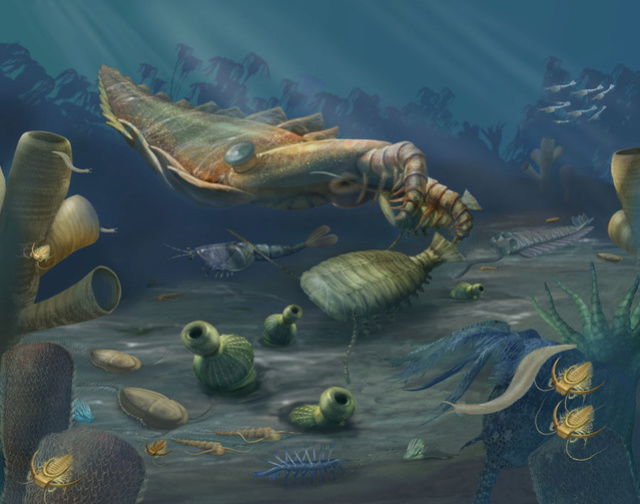 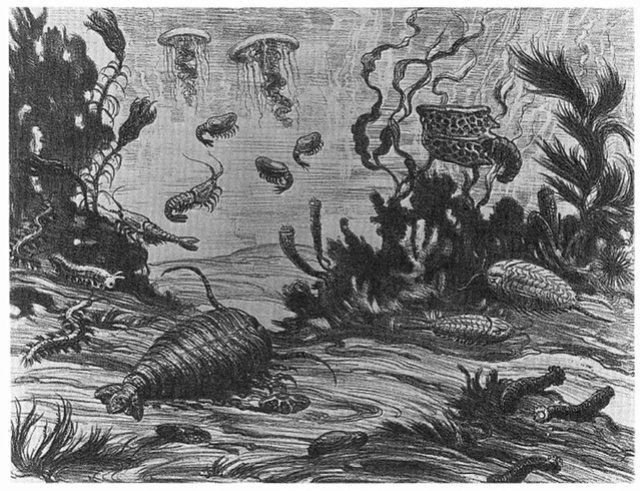 1.1. Reconstruction of the Burgess Shale fauna done by Charles R. Knight in 1940, probably the model for his 1942 restoration. All the animals are drawn as members of modern groups. Above Sidneyia, the largest animal of the scene, Waptia is reconstructed as a shrimp. Two parts that really belong to the unique creature Anomalocaris are portrayed respectively as an ordinary jellyfish (top, left of center) and the rear end of a bivalved arthropod (the
large creature, center right, swimming above the two trilobites).

1 . The centerpiece of Knight's reconstruction is an animal named Sidneyia, largest of the Burgess arthropods known to Walcott, and an ancestral chelicerate in his view.
2 . Knight restores each animal as a member of a well-known group that enjoyed substantial later success. Marrella is reconstructed as a trilobite, Waptia as a proto-shrimp, though both are ranked among the unplaceable arthropods today. The modern version features the unique phyla-giant A nomalocaris; Opabinia with its five eyes and frontal "nozzle"; Wiwaxia with its covering of scales and two rows of dorsal spines.
3. Knight's creatures obey the convention of the "peaceable kingdom. " All are crowded together in an apparent harmony of mutual toleration; they do not interact. The modern version retains this unrealistic crowding (a necessary tradition for economy's sake), but features the ecological relations uncovered by recent research: priapulid and polychaete worms burrow in the mud; the mysterious Aysheaia grazes on sponges; A nomalocaris a two
foot-terror of the Cambrian seas, and one of the Burgess "unclassifiables. "
4. Consider A nomalocaris as a prototype for Whittington's revision. Knight includes two animals omitted from the modern reconstruction: jellyfish and a curious arthropod that appears to be a shrimp's rear and covered in front by a bivalved shell. Both represent errors committed in the overzealous attempt to shoehorn Burgess animals into modern groups. Walcott's "jellyfish" turns out to be the circlet of plates surrounding the mouth of Anomalocaris; the posterior of his "shrimp" is a feeding appendage of the same carnivorous beast. Walcott's prototypes for two modern groups become body parts of the largest Burgess oddball, the appropriately
named A nomalocaris. 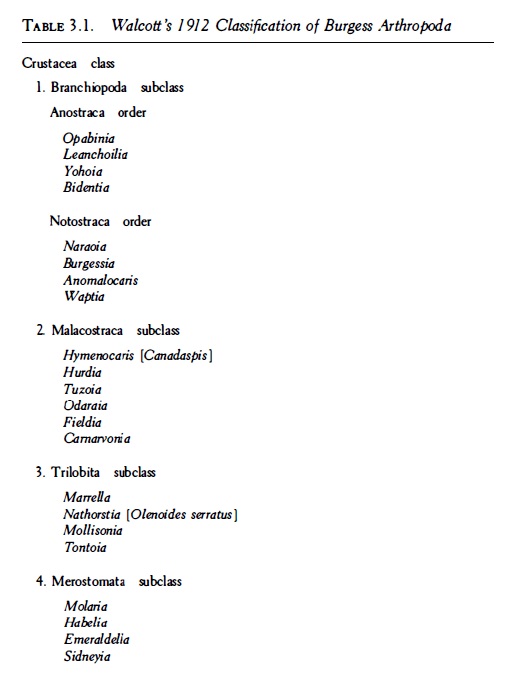 » Amazing fossils recently discovered from the Cambrian
» Stephen Meyer's new cosmological argument
» Carbohydrates and glycobiology: the "3rd alphabet of life" after DNA and proteins
» How can you say that the universe appears fine-tuned for life? Most of it is completely inhospitable and hostile to life.
» Spark of life: Metabolism appears in lab without cells - life - 25 April 2014 - New Scientist