Dirac, God is a mathematician

Dirac is arguably the greatest theoretical physicist of the twentieth century after Einstein. 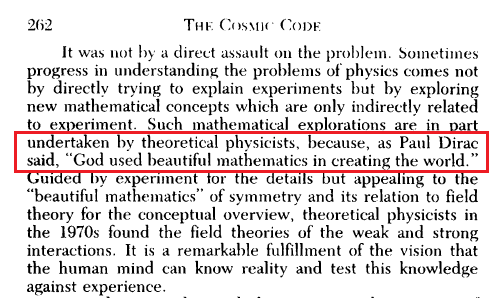 The Evolution of the Physicist's Picture of Nature (1963) 1

It seems to be one of the fundamental features of nature that fundamental physical laws are described in terms of a mathematical theory of great beauty and power, needing quite a high standard of mathematics for one to understand it. You may wonder: Why is nature constructed along these lines? One can only answer that our present knowledge seems to show that nature is so constructed. We simply have to accept it.

The Dirac revolution 2
The highly-introverted physicist Paul Dirac is regarded as one of the key physicists of the 20th century. If anything, Dirac's reputation has only increased in the years since his death, and his work seems more central than ever. Legend has it that Dirac's great moment of inspiration came in 1928 when he was staring into the fireplace at Cambridge University. Dirac realized how it was possible to combine quantum mechanics with special relativity. The result was that Dirac derived his famous equation for an electron which is known as the Dirac equation

The Dirac equation  2
The challenge for physicists in the 1920s was to combine quantum mechanics with the special theory of relativity. Erwin Schrödinger had derived a famous equation which described the quantum mechanical behavior of a particle, but the equation was not relativistic, which meant it did not describe the behavior accurately as the particle's speed approached the speed of light. Paul Dirac was determined to find a relativistic equation which accurately described the quantum mechanical behavior of an electron.
Dirac's successfully derived one of the most important equations in physics, now simply known as the Dirac equation.

The Dirac equation made some extraordinary predictions. It predicted the spin of an electron, which was quickly realized to be a perfect match with experiment. But, most extraordinary of all, the Dirac equation predicted new types of particles which we now know as antimatter. It is now known that all particles have an antimatter equivalent. It was the discovery of antimatter which was to have such a revolutionary effect in quantum mechanics. If a particle of matter meets its antimatter equivalent then both particles disappear in a flash of energy (potentially quite destructive energy). The reverse process is also true: if enough energy can be confined to a small space then a particle can be created together with its antimatter equivalent (a process known as pair production). It is possible to make particles! This means that the number of particles in the universe is not a fixed number.
This development is described by Roger Penrose in his book The Road to Reality: "The key property of an antiparticle is that the particle and antiparticle can come together and annihilate one another, their combined mass being converted into energy, in accordance with Einstein's E=mc2. Conversely, if sufficient energy is introduced into a system then there arises the strong possibility that this energy might serve to create some particle together with its antiparticle. Thus, our relativistic theory certainly cannot just be a theory of single particles, nor of any fixed number of particles whatever. Indeed, according to a common viewpoint, the primary entities in such a theory are taken to be the quantum fields, the particles themselves arising merely as 'field excitations'."

The absolute wonder 3
So now we have derived the Dirac equation, the relativistic equation for the electron, we have to determine what are the implications of the equation for the behavior of the electron. We will find that the many implications are really quite remarkable, and explain the properties of the matter of which the world is made. Firstly, if we examine three of the gamma matrices, we find that the 2×2 matrices in the top right segment of the gamma matrices precisely match the Pauli spin matrices (describing the spin of the electron): It appears that the gamma matrices seem to be describing the spin of the electron. Indeed, according to Dirac: "The gamma matrices are new dynamical variables which it is necessary to introduce in order to satisfy the conditions of the problem. They may be regarded as describing some internal motions of the electron, which for most purposes may be taken as the spin of the electron postulated in previous theories." So this is really something quite remarkable. Dirac derived the need for electron spin purely mathematically! It is as if mathematics alone is predicting that the electron must be spinning (this derivation is in contrast to how we derived the Pauli spin matrices merely by observing electron spin and trying to model it mathematically). This was truly an amazing achievement by Dirac. The physicist John Van Vleck compared Dirac's explanation of electron spin to "a magician's extraction of rabbits from a silk hat." According to Leon Rosenfeld, "the equation was immediately seen as the solution. It was regarded really as an absolute wonder." This was perhaps the first time that mathematics on its own was used to predict the behavior of Nature. It revealed the extraordinary power of mathematics as a tool for theoretical physics.

Someone objects that the mathematical equations are not the principles ruling the universe, but they are only a representation imagined by man. Someone else claims that math is only the language used to describe the universe. This objections however do not stand since the laws of physics are intrinsecally abstract mathematical concepts, and when we ask them to describe which "natural principles" should really rule the universe and be represented by the equations of physics (for example the Schroedinger or the Dirac equations), they remain speachless. Their incapacity to describe concretely the laws of physics is a direct consequence of the intrinsic abstract and conceptual nature of the laws of physics. Actually, they use the term "natural principles" (or equivalent expressions) but these are vague and completely indefinite concepts: they are not true concepts, but only empty rethoric figures, without any real meaning. Besides, the objective result is that natural phenomena occur according to some specific mathematical equations; this result can be explained without any need to introduce vague and obscure concepts of "natural principles". The most simple and direct explanation is that nature is ruled by some specific mathematical equations. The "natural principles" are then a concept as empty and meaningless as superfluous.

It is not possible to account for the extraordinary agreement between the experimental data and the laws of physics and the predictive power of such laws, without admitting that the state of the universe must necessarily be determined by some specific mathematical equations. The existence of these mathematical equations implies the existence of a personal, conscious and intelligent Creator. Atheism is incompatible with the view of the universe, presented by modern science, since the intrinsic abstract and conceptual nature of the laws ruling the universe, implies the existence of a personal God.

Pauli exclusion principle: two identical fermions cannot occupy the same quantum state. 4
As Jim Baggott says in his book Higgs: "The principle derives from the mathematical form of the wavefunction for any composite state consisting of two or more electrons. If the composite state were assumed to be created with two electrons which have precisely the same physical characteristics, then the wavefunction has zero amplitude — such a state could not exist." Atoms are mainly empty space, so why can't I push my finger through a wooden desk? Isn't there enough empty space for two atoms to pass through each other? Well, it is the Pauli exclusion principle which brings solidity to matter. I cannot push my finger through a wooden desk because any penetration of my finger would result in the electrons in the atoms in my finger being in the same state (same position) as the electrons in the atoms in the wood. The exclusion principle states that is simply not possible. Hence, the wood appears impenetrable to your finger. So the Pauli exclusion principle results in fermions taking the role of the matter particles, the particles which compose all of the objects in the material world. Cars, trees, water, gases, human beings, are all composed of fermions: protons, neutrons, and electrons.


THE COSMIC CODE
Quantum Physics as the Language of Nature , page 213:

The modern theory of the electron begins with an investigation by Paul Dirac, one of the founders of the new quantum theory. Dirac knew that two separate sets of ideas-the new quantum theory and the relativity theory-were both correct. But the problem was to combine these two sets of ideas and devise a quantum theory which also obeyed the principle of relativity. Dirac focused his attention on the electron-a known quantum particle whose wave properties had already been confirmed. Could he find a mathematical description of the electron's wave which was consistent with Einstein's relativity theory? Finally, Dirac mathematically deduced an equation-the Dirac equation-that the electron wave had to obey. This equation had profound implications. First it predicted the observed properties of electrons as they moved in electric and magnetic fields, which, until then, eluded a deep theoretical understanding. These predictions are what convinced physicists that Dirac's theory was right. But the most startling prediction of Dirac's electron equation was the existence of a new kind of matter never before encountered-antimatter. How did this discovery come about? Dirac's equation actually had two solutions; one solution described the electron, the other solution described a new particle with positive electric charge--opposite that of the electron. At first Dirac thought that the particle corresponding to this new solution had to be the proton, which at the time was the only positively charged particle known. Later it became clear that the new particle predicted by Dirac's equation had to have exactly the same mass as the electron and thus could not be the proton, whose mass was nearly 2,000 times that of the electron. Dirac's equation really predicted a new kind of electron-the antielectron or positron. Soon it was realized by physicists that the Dirac equation, in implying the existence of the antielectron, was offering but one specific example of the general consequence of combining quantum theory with the principle of relativity-namely, the existence of antimatter.

Antimatter is identical to ordinary matter except that the sign of all electric charges of the particles making up the antimatter are reversed. For every particle that can exist, the laws of physics imply that an antiparticle can also exist. Antiprotons could exist and so could antihydrogen atoms made up out of an antiproton and a positron. Whole antimatter worlds could exist-perhaps distant galaxies were made out of antimatter. Large pieces of antimatter do not exist in our world because matter and antimatter, if brought together, annihilate each other in a spectacular explosion. Antimatter seems bizarre-like another world behind the looking glassbut it was an unambiguous prediction of Dirac's theory, and if the theory was right it had to exist. And indeed it did. The antielectron was first discovered bv Carl Anderson, a Caltech physicist, in cosmic rays raining ;!own on the earth. Later, antimatter versions of the proton and other particles were found; physicists have even recently made a complete antideuteron, an atomic nucleus consisting of an antiproton and an antineutron. Previous to Dirac's idea of antimatter, physicists could think of the quantum particles as immutable-the same number of particles that entered a reaction had to leave.

Hmm.... and what is the source of the rules of nature ?

Physics is the manifestation or effect of mathematic interacting with matter in our "real world".