Defending the Christian Worldview, Creationism, and Intelligent Design » The catalog of life » Do you think God has not a sense of humour ? Think twice !!

Do you think God has not a sense of humour ? Think twice !!

Do you think God has not a sense of humour ? Think twice !!

Hawkmoths zap bats with sonic blasts from their genitals

The tropical moths produce ultrasound in response to bat sonar, which may serve as a warning or jam bat echolocation. Talk about a multi-purpose tool. Several species of tropical moth can rasp their genitals against their abdomens to beam loud ultrasound signals at approaching bats, possibly throwing the hunters off course1.

Bats and moths have been engaged in a natural arms race for nearly 65 million years, each evolving strategies to outwit the other. Scientists have long known that members of the tiger moth family blast bats with ultrasound signals resembling the echolocation calls bats make as they search for, or close in on, prey. But tiger moths were assumed to be the only moth group able to imitate the bats’ signals.

Behavioural ecologist Jesse Barber of Boise State University in Idaho and phylogeneticist Akito Kawahara of the University of Florida in Gainesville went to Borneo to try their luck with hawkmoths, a large family of excellent flyers, many of which are found in the tropics. After luring them with lights, the researchers grabbed the spiny-legged insects by hand — “We suffered quite a few punctured fingers getting good at it,” Barber says — and trussed them up in harnesses made from fishing line and drinking straws.

When the researchers played bat ultrasound to the hawkmoths, they found that three species (Cechenena lineosa, Theretra boisduvalii and Theretra nessus) they had captured emitted ultrasound clicks in response. The males did so by rapidly grating stiff scales on the outer surface of their 'claspers' — structures normally used to grab females during mating — against part of the abdomen, the researchers report. Females also seem to pull part of their genitalia inwards so that genital scales rub against their abdomens.

The purpose of this behaviour is not known. Perhaps the moths’ ultrasound serves as a boastful warning to bats of the hawkmoths’ barbed legs and excellent aerial skills. Or maybe the hawkmoths are jamming the bats’ sonar, as one species of tiger moth has been shown to do2. Either way, the fact that hawkmoths can also make ultrasound clicks means it is likely that “there are even more insect groups that make sounds back at bats”, Barber says. Clearly it is “a really good strategy for insects to deploy”.

The new finding is “really, really cool”, says neuroethologist John Ratcliffe at the University of Southern Denmark in Odense. The hawkmoths and the tiger moths both have ears that can detect bat sonar and structures to make bat-like ultrasound clicks, although each has those organs in very different places. The hawkmoths have ears on their faces, whereas tiger moths' ears are on their thoraxes. And the tiger moth makes ultrasound clicks with membranes on its thorax. That makes the two species a prime example of evolutionary convergence, the appearance of similar features in separate groups of animals.

“At both ends, in ears and sound production, it’s double convergence, which is really neat,” says Ratcliffe. 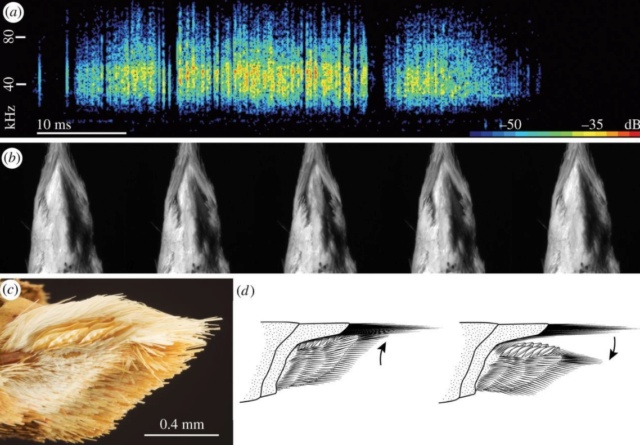 Defending the Christian Worldview, Creationism, and Intelligent Design » The catalog of life » Do you think God has not a sense of humour ? Think twice !!