Irreducible complexity is not a argument from ignorance

Irreducible complexity is not a argument from ignorance Fri Jul 17, 2015 6:44 am

What i most routinely see, is opponents of my posts arguing that intelligent design is an argument from ignorance. I disagree.

There are many parts, subunits of enzymes and proteins, co-factors etc. that have no apparent multiple functions and could not be co-opted or be available through horizontal gene transfer, or whatever. One example is the last 8 enzymes used in the biosynthesis pathway of chlorophyll http://reasonandscience.heavenforum.org/t1546-chlorophyll-biosynthesis-pathway  for what reason would these enzymes emerge naturally, if by their own, and not duly embedded in the whole biosynthesis process, they have no use at all? and even lets say chlorophyll : why would nature invent such extremely complex pathways to produce such a complex molecule, if, even if ready to go, it is not embedded in the whole process of photosynthesis ? and how could they be embedded in the system, if the light-harvesting complex were not present? please explain. Furthermore, i wonder how nature came up with the information to make the individual parts, the subunits, and providing the right assembly instructions for the individual parts, and the whole thing. As known, body plans and 3d cell shape does not depend only on genetic information, but also epigenetic information and other unknown factors.

Chlorophyll biosynthesis is a complex pathway with 17 highly specific steps, of which eight last steps are used by specific enzymes uniquely in this pathway.

Even if we find in the sequence space the right steps to make the enzymes required to permit the synthesis of the products of these intermediate steps, so what ? the intermediate products would have no function, and no survival advantage of the organism would be provided. Natural selection could not operate to favor a system with anything less than all seventeen enzymes being present, functioning, and processing all intermediate products to get the final product. What evolutionary process could possibly produce complex sophisticated enzymes that generate nothing useful until the whole process is complete? And even if everything were in place correctly, and chlorophyll were synthesized correctly, so what? Unless chlorophyll AND all other proteins and protein complexes were fully in place, fully evolved and functional, correctly interlocked and working in a interdependent manner, photosynthesis would not happen. But even if photosynthesis would happen, so what? Why would the organism choose such an extremely complex mechanism, if it was surviving just fine previously? Furthermore, you do not just need the right enzymes. For the assembly of a biological system of multiple parts, the following steps must be explained: the origin of the genome information to produce all subunits and assembly cofactors. Parts availability, synchronization, manufacturing and assembly coordination through genetic information, and interface compatibility. The individual parts must precisely fit together. All these steps are better explained through a super intelligent and powerful designer, rather than mindless natural processes by chance, or/and evolution since we observe all the time minds capabilities producing machines and factories, producing machines and end products.

everything *has* to be in place at once or else an organism has no survival advantage. The thing is, there’s no driver for any of the pieces to evolve individually because single parts confer no advantage in and of themselves. The necessity for the parts of the system to be in place all at once is simply evidence of creation. Photosynthesis missing one piece (like chlorophylls) is like a car missing just one piece of the drive train (such as a differential); it’s not that it doesn’t function as well – it doesn’t function at all! 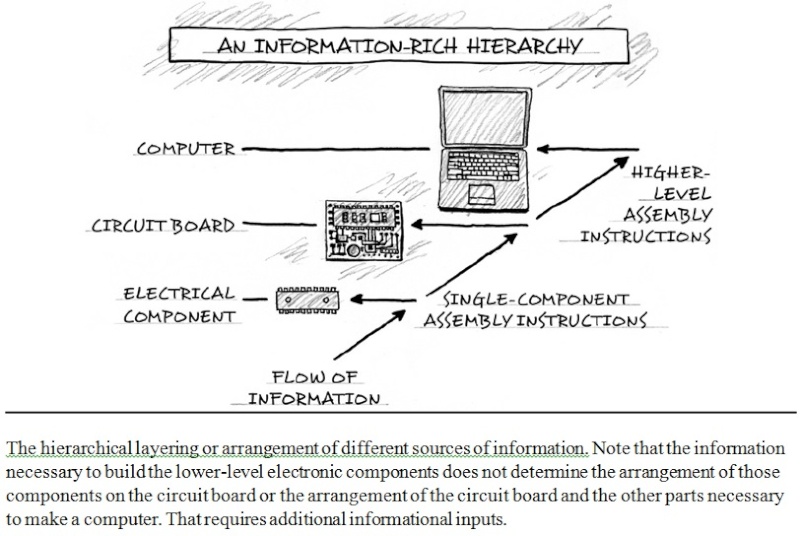 What natural selection lacks, intelligent design—purposive, goal-directed selection—provides. Rational agents can arrange both matter and symbols with distant goals in mind. In using language, the human mind routinely "finds" or generates highly improbable linguistic sequences to convey an intended or preconceived idea. In the process of thought, functional objectives precede and constrain the selection of words, sounds, and symbols to generate functional (and meaningful) sequences from a vast ensemble of meaningless alternative possible combinations of sound or symbol. Similarly, the construction of complex technological objects and products, such as bridges, circuit boards, engines, and software, results from the application of goal-directed constraints. Indeed, in all functionally integrated complex systems where the cause is known by experience or observation, designing engineers or other intelligent agents applied constraints on the possible arrangements of matter to limit possibilities in order to produce improbable forms, sequences, or structures. Rational agents have repeatedly demonstrated the capacity to constrain possible outcomes to actualize improbable but initially unrealized future functions. Repeated experience affirms that intelligent agents (minds) uniquely possess such causal powers.  Analysis of the problem of the origin of biological information, therefore, exposes a deficiency in the causal powers of natural selection and other undirected evolutionary mechanisms that corresponds precisely to powers that agents are uniquely known to possess. Intelligent agents have foresight. Such agents can determine or select functional goals before they are physically instantiated. They can devise or select material means to accomplish those ends from among an array of possibilities. They can then actualize those goals in accord with a preconceived design plan or set of functional requirements. Rational agents can constrain combinatorial space with distant information-rich outcomes in mind. The causal powers that natural selection lacks—by definition—are associated with the attributes of consciousness and rationality—with purposive intelligence. Thus, by invoking intelligent design to overcome a vast combinatorial search problem and to explain the origin of new specified information, contemporary advocates of intelligent design are not positing an arbitrary explanatory element unmotivated by a consideration of the evidence.

Irreducible complexity is not based on a negative, namely that there is no evidence for a naturalistic pathway. Rather than that, it makes a positive claim, which can be falsified, upon (a) gene knockout, (b) reverse engineering, (c) examining homologous systems, and (d) sequencing the genome of the biochemical structure. ( Dennis Jones ) Gene knockout has been done several times, providing evidence that the organism was unable to replace a given gene or protein by natural means. 1 The absence of evidence that evolution is not capable to replace given part is empirical evidence, that falsifies the claim of the ToE. It's therefore not justified to claim the inference is an argument of ignorance. Quite the contrary is the case. As for example, if i ask you : can you change a us$100 bill ? and you answer: sorry, I have no smaller bills. You open your wallet, and and its confirmed, no change in your wallet, then you have proven that you have indeed no smaller bills. You have proven negative, which is not an argument of ignorance, since you checked and got empirical proof.

If proponents of intelligent design were arguing in a preceding manner, they would be guilty of arguing from ignorance. But the argument  takes the following form: