Defending the Christian Worldview, Creationism, and Intelligent Design » The catalog of life » The snappy shrimp

The bigclaw snapping shrimp produces a loud, staccato concussive noise with its snapping claw. The sound is produced when the claw snaps shut at great speed creating a high-speed water jet. This creates a small, short-lived cavitation bubble and it is the immediate collapse of this bubble that creates the sound.[3] A spark is formed at the same time. The snapping noise serves to deter predators and to stun prey, and is also used for display purposes. 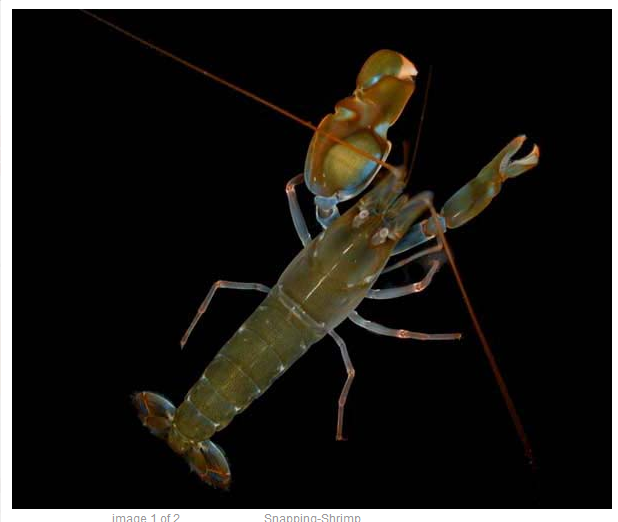 The pistol shrimp’s claw is an extremely specialized construct that needs precision design in order to function. Of the millions of random mutations that might occur that would change the shape of a claw (a bump, indentation or protrusion of some sort?) there would be precious few that would have been ‘on the way’ to becoming a ‘sonic gun’ variant. Granting that evolutionists admit that beneficial mutations are rare, the point is; “What survival benefit would those small shape changes have conferred to the shrimp on the way to becoming a sonic claw?”

The shrimp also takes part in an interesting symbiotic relationship with certain species of goby fish. The pistol shrimp has terrible eyesight and cannot see predators approaching. Despite its formidable weaponry, the pistol shrimp is left vulnerable to attacks by fast predators that can take advantage of its poor eyesight. To overcome this difficulty, the pistol shrimp stays close by its symbiont, the goby fish. The shrimp rests its antennae on the goby’s body. When the goby sees a predator approaching, it warns the pistol shrimp by means of certain bodily movements which act as signals. When the shrimp feels these signals, it retreats, along with the goby, back into their mutually-shared burrow. This allows the shrimp to lay in wait to ambush the unwitting fish with its pressure-weapon without fear.

The loud blast created by a pistol shrimp's claw can be heard from great distances. Because of this, they also use their claw for communicating with other pistol shrimps. When you listen underwater you may hear a lot of popping sounds. Some of them may be made by pistol shrimps firing off their sound waves to communicate with each other.

The tiny finger sized critter is capable of producing a sound louder than a jet engine!
The shrimp can be left-handed or right-handed and may feature the special claw on either arm of the body, but unlike regular shrimp claws and other crustaceans, it does not have pincers at the end of it. Instead the claw is designed rather like a pistol with two parts: a “hammer” part, that moves backward into a right-angled position, and the other half of the claw is in a fixed closed position. When it releases the hammer part of the claw it snaps perfectly into position and makes its tooth-shaped plunger move into a niche in the other half of the claw.

It was once believed that the sound was generated when the two claw surfaces hit each other. But research has since shown that this isn’t the case. The snapping action of the claw actually shoots out a jet of water at up to 62 miles an hour (100km/hr) which generates a low pressure cavitation bubble that bursts with a loud snap. This phenomenon can be explained by Bernoulli’s principle, which states that for an inviscid flow, an increase in the speed of the fluid occurs simultaneously with a decrease in pressure or a decrease in the fluid’s potential energy. In simpler terms, when a liquid moves above a certain speed, the pressure within the liquid decreases. When this pressure drops, it allows tiny air bubbles in these fast-moving fluids to expand and if the pressure builds back up, the bubbles implode.

The snap of the bubbles also produces something known as sonoluminescence, which is caused when the collapsing cavitation bubble reaches temperatures of over 4700 degrees Celsius or 5000 Kelvin. That is almost as hot as the surface of the sun, estimated at around 5,800 Kelvin (5,500 °C)! The sonoluminescence also produces a short, intense flash of light, lasting no longer than 10 nanoseconds and as short as 300 picoseconds (A picosecond is one trillionth of a second, a time scale beyond the measurement capability of researchers’ tools) and which can’t be seen by the naked eye.

The whole process from the snapping of the claw to the burst of the bubble and the loud sound is almost instantaneous and takes place within 300 microseconds. Researchers were only able to study this fascinating creature’s abilities through ultra high-speed cameras that take 40,000 frames per second.

The snapping shimp has proven to be stiff competition for larger animals like the Sperm Whale (230+ decibels) and Beluga Whale for the title of ‘loudest animal in the sea’. The snap of its claw releases a sound that can reach 218 decibels- louder than a gunshot. This species sometimes also live in colonies that can number over 300 members. Divers have witnessed the ceaseless cacophony that colonies of these shrimps produce; their loud crackling sound has been described as if a hundred people are cracking their knuckles at once, or like sizzling of fat in a pan or like 100 people bursting bubble wrap at once!

Colonies of snapping shrimp consist of a single large female, the queen, and possibly a single male. The offspring are divided into workers who care for the young and soldiers who protect the colony with their huge claws. Most of the soldiers are males.
Aquarium hobbyists have given up on trying to keep pistol shrimps in aquariums as the sonic blast of these tiny creatures easily cracks the aquarium glass
Another fascinating thing about these amazing creatures is that Naval Submarines have been known to hide amongst beds of Pistol shrimp to hide from sonar detection. Apparently the noise they create is so much that other submarines find it impossible to pickup other noises using sonar.
Pistol shrimp have have the ability to reverse claws. When the snapping claw is lost, the missing limb will regenerate into a smaller claw and the original smaller appendage will grow into a new snapping claw.
The Pistol Shrimp often shares a symbiotic association with the goby (fish). The goby has a good eye-sight and thus, warns the shrimp of any approaching predator in the exchange of food that the shrimp provides to the goby and the burrow that the Shrimp digs for both, itself and the goby, to live in. 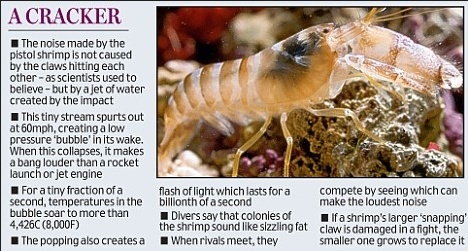 There is no way that this tiny marvel of engineering did not have a designer.

Among the fascinating creatures of the deep is a finger-size shrimp with an oversize claw—resembling a boxing glove—that it uses to stun its prey by snapping the claw shut. The snapping produces a sharp cracking sound.

When colonies of the shrimp snap their claws, the cacophony is so intense that submarines can take advantage of it to hide from sonar.

A year ago, a team of European scientists revealed that the sound is caused by the bursting of a bubble that forms when a shrimp snaps its claw shut. Now, the team reports that the bubble emits not only sound but a flash of light—indicating the extreme temperature and pressure inside the bubbles before they burst. 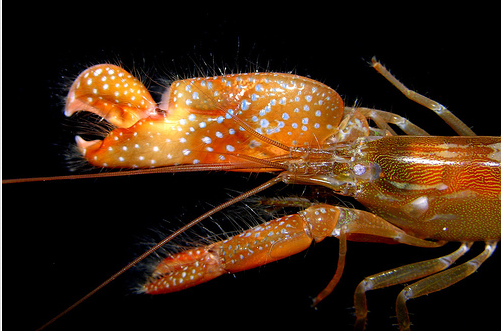 What this light part does is highlights the extreme conditions achieved at collapse, said Detlef Lohse, a physics professor at the University of Twente in the Netherlands.

Lohse and his colleagues Michel Versluis, also from the University of Twente, and Barbara Schmitz of the Technical University of Munich in Germany explain the flashes of light associated with the bubble collapse in the October 4 issue of Nature.

The shrimp, Alpheus heterochaelis, is a dirty-green crustacean that prowls the shallow waters of tropical seas. It has two claws', one resembling an oversize boxing glove, which it uses to stun prey, such as small crabs, by snapping the oversize claw shut.

Lohse and his colleagues reported in the September 22, 2000, issue of Science that the stunning snap comes not from the clap of the claws coming together but from a bubble generated by the claws' rapid closing motion.

When the claw snaps shut, a jet of water shoots out from a socket in the claw at speeds of up to 62 miles (100 kilometers) an hour, generating a low-pressure bubble in its wake. As the pressure stabilizes, the bubble collapses with a loud bang.

The whole process, which was recorded with the use of high-speed cameras and sound equipment, occurs within 300 microseconds.

Now, using a device that counts photons, Lohse and his colleagues recorded a flash of light that occurs when the bubble collapses.

The flashing phenomenon is thought to be similar to sonoluminescence, in which bubbles that are in a liquid driven by a strong sound field emit light. The researchers have dubbed the shrimp activity shrimpoluminescence.

In sonoluminescence, the peak intensity of the emitted light is at a short wavelength. This indicates that the temperature inside the bubble is at least 10,000 degrees Kelvin (18,000 degrees Fahrenheit).

The researchers say the light emitted from the snapping shrimp's bubbles suggests that the temperature inside the bubbles must be at least 5,000 degrees Kelvin (8,540 degrees Fahrenheit) at the time of collapse. Otherwise, we wouldn't see it, said Lohse.

He compared the heating inside the bubble at the time of collapse to that of a bicycle pump when it's being used to pump a tire. When you pump your bike to get air, you feel the pump is getting hot, he said. It is getting hot because you pump fast and the heat generated at compression cannot escape.

"The same thing is happening here," he added. "The bubble is compressed and getting hot on such a fast time scale that the heat cannot escape."

The researchers recorded the flash of light that occurs when a bubble collapses as well as other dim flashes of light, which are thought to be associated with bubble fragments. The mechanism responsible for the secondary flashes isn't clear.

The duration of the flash that occurs when the main bubble collapses is extremely short, lasting no longer than 10 nanoseconds and as short as 300 picoseconds, said Lohse. A picosecond is one trillionth of a second, a time scale beyond the measurement capability of the researchers' tools.

The researchers were not able to see the flashes with the naked eye. Lohse doesn't rule out, however, the possibility that they might be visible to a person very close to the shrimp when the bubble bursts and whose sight is well adjusted to the underwater darkness.

The flashes appear to have no biological significance, the researchers say, but are a by-product of the bubble collapse, which the shrimp uses to stun or kill its prey.

But light emission is nonetheless indicative of the extreme conditions inside the bubble at collapse and therefore demonstrates the violence of the event, the researchers conclude in their scientific paper.

Defending the Christian Worldview, Creationism, and Intelligent Design » The catalog of life » The snappy shrimp