Intelligent Design, the best explanation of Origins » Astronomy & Cosmology and God » The incredible stability of the Earth and our Solar System

The incredible stability of the Earth and our Solar System

The stability of the solar system is one of the oldest problems in theoretical physics, dating back to Isaac Newton. After Newton discovered his famous laws of motion and gravity, he used these to determine the motion of a single planet around the Sun and showed that the planet followed an ellipse with the Sun at one focus. However, the actual solar system contains eight planets, six of which were known to Newton, and each planet exerts small, periodically varying, gravitational forces on all the others.

The puzzle posed by Newton is whether the net effect of these periodic forces on the planetary orbits averages to zero over long times, so that the planets continue to follow orbits similar to the ones they have today, or whether these small mutual interactions gradually degrade the regular arrangement of the orbits in the solar system, leading eventually to a collision between two planets, the ejection of a planet to interstellar space, or perhaps the incineration of a planet by the Sun. The interplanetary gravitational interactions are very small—the force on Earth from Jupiter, the largest planet, is only about ten parts per million of the force from the Sun 1

Most of the calculations agree that eight billion years from now, just before the Sun swallows the inner planets and incinerates the outer ones, all of the planets will still be in orbits very similar to their present ones. In this limited sense, the solar system is stable.

Jacques Laskar of the Bureau des Longitudes in Paris carried out the most extensive calculations for investigating the long-term stability of the solar system. He simulated the gravitational interactions among all the eight planets over a period of 25 billion years or for a period five times the age of the solar system. He found that the eccentricities and other elements of the orbits undergo chaotic excursions. This simulation makes it impossible to predict the locations of the planets after a hundred million years. Does Laskar’s result indicate that the Earth might eventually find itself in a highly elliptical orbit, taking it much closer to and farther from the Sun? In other words, will it mean the solar system could lose a planet? The immediate answer is perhaps, no. This is because of the fact that even the chaos has to operate within physical limits. As an example, meteorologists cannot predict the weather that is another chaotic system as far as a month in advance, but they can be quite confident that those conditions will fall within a certain range. This is because external constraints, for example, the Sun’s brightness and the length of the day, set certain limits on the overall system. Interestingly, Laskar observed that despite the influence of chaos on the exact locations of the planets, their orbits remain relatively stable over billions of years. This means that the long-term configuration is highly unpredictable, and the orbits remain well behaved for preventing collisions between the neighboring planets. In this case, an external constraint is imposed by the conservation of angular momentum in the system, which limits the excursions of orbital eccentricity for bodies of planetary mass. 5

Long-term integrations and stability of planetary orbits in our Solar system
21 October 2002
We present the results of very long-term numerical integrations of planetary orbital motions over 10^9 -yr time-spans including all nine planets. A quick inspection of our numerical data shows that the planetary motion, at least in our simple dynamical model, seems to be quite stable even over this very long time-span. A closer look at the lowest-frequency oscillations using a low-pass filter shows us the potentially diffusive character of terrestrial planetary motion, especially that of Mercury. The behavior of the eccentricity of Mercury in our integrations is qualitatively similar to the results from Jacques Laskar's secular perturbation theory (e.g. emax∼ 0.35 over ∼± 4 Gyr).

The Earth-Moon System and the Dynamical Stability of the Inner Solar System
1998
Evidence from self-consistent solar system n-body simulations is presented to argue that the Earth-Moon system (EM) plays an important dynamical role in the inner solar system, stabilizing the orbits of Venus and Mercury by suppressing a strong secular resonance of period 8.1 Myr near Venus's heliocentric distance. The EM thus appears to play a kind of "gravitational keystone" role in the terrestrial precinct, for without it, the orbits of Venus and Mercury become immediately destabilized. 6

The Earth’s moon appears to play a vital role in moderating the climate by stabilizing the axial tilt. It is suggested that a chaotic tilt may be a deal-breaker in terms of habitability: A satellite the size of the Moon is not only helpful but also produces stability. 9

Unusually circular orbit of the earth
The unique arrangement of large and small planetary bodies in the solar system may be required to ensure the stability of the system. In addition, it is readily apparent from the cycle of ice ages that the earth is at the edge of the life zone for our star. Although the earth has one of the most stable orbits among all the planets discovered to date, its periodic oscillations, including changes in orbital eccentricity, axial tilt, and a periodic elongation of Earth's orbit, results in a near freeze over (Kerr, R. 1999. Why the Ice Ages Don't Keep Time. Science 285: 503-505, and Rial, J.A. 1999. Pacemaking the Ice Ages by Frequency Modulation of Earth's Orbital Eccentricity. Science 285: 564-568.). According to Dr. J. E. Chambers, simulations of planetary formation "yield Earth-like planets with large eccentricities (e ~ 0.15)," whereas the Earth has an e value of 0.03. He goes on to say, "Given that climate stability may depend appreciably on e, it could be no coincidence that we inhabit a planet with an unusually circular orbit." (Chambers, J. E. 1998. How Special is Earth's Orbit? American Astronomical Society, DPS meeting #30, #21.07) With this new information, it seems very unlikely that stable planetary systems, in which a small earth-like planet resides in the habitable zone, exist in any other galaxy in our universe. This does not even consider the other design parameters that are required for life to exist anywhere in the universe. 2

Orbit and Rotation
Stability is an important consideration in evaluating the effect of orbital and rotational characteristics on planetary habitability. Orbital eccentricity is the difference between a farthest and closest approach of a planet to its parent star divided by the sum of said distances. It is a ratio of the shape of the elliptical orbit. The greater the eccentricity, the higher the temperature fluctuation on a planet’s surface. Living organisms can only stand so much variation, particularly if the fluctuations overlap both the freezing and boiling point of the planet’s main biotic solvent (e.g., water on Earth). If the Earth’s oceans were alternately boiling and freezing solid, it is hard to imagine life as we know it having evolved. The orbit of the Earth is almost circular, with an eccentricity of less than 0.02; other planets in the solar system (except Mercury) have eccentricities that are similarly benign. Data gathered on the orbital eccentricities of extrasolar planets show that 90% have an orbital eccentricity larger than that obtained within the solar system and the average is fully 0.25 [10]. It means that the majority of planets have highly eccentric
orbits and the average distance from their star is deemed to be within the HZ. The movement of a planet around its rotational axis must reveal certain criteria if life is to have the opportunity to evolve. The significant assumption is that the planet should have moderate seasons. If there is little or no axial tilt relative to the perpendicular of the ecliptic, seasons will not occur. If a planet is radically tilted, seasons will be extreme and make it more difficult for a biosphere to achieve homeostasis. 8

Galactic Neighborhood
As a matter of fact, relative loneliness is ultimately what a life-bearing system demands. If the Sun were crowded among other systems, the chance of being fatally close to dangerous radiation sources would increase significantly. Again, close neighbors might disrupt the stability of different orbiting bodies such as Oort cloud and Kuiper belt objects, which can bring catastrophe if knocked into the inner solar system. A star as metal rich as the Sun would perhaps not have formed in the very outermost regions of the Milky Way given a decline in the relative abundance of metals and a general lack of star formation. Therefore, a suburban location such as that the solar system enjoys is preferable to a galaxy’s center or farthest reaches. 10


galaxy location (9) (p = 0.1)
if too close to dense galaxy cluster: galaxy would be gravitationally unstable, hence unsuitable for life
if too close to large galaxy(ies): same result

number of stars in the planetary system (10) (p = 0.2)
if more than one: tidal interactions would make the orbits of life-supportable planets too unstable for life
if fewer than one: no heat source would be available for life chemistry

rate of decline in tectonic activity (26) (p = 0.1)
if slower: crust conditions would be too unstable for advanced life
if faster: crust nutrients would be inadequate for sustained land life 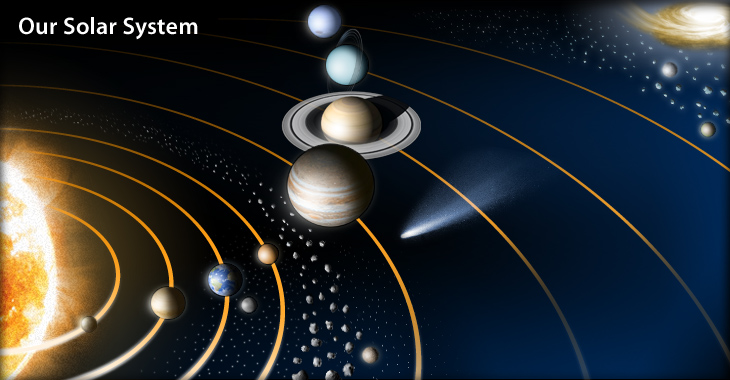 Intelligent Design, the best explanation of Origins » Astronomy & Cosmology and God » The incredible stability of the Earth and our Solar System