Intelligent Design, the best explanation of Origins » Theory of evolution » Is Darwinism compatible with the Christian Faith ?

Is Darwinism compatible with the Christian Faith ?

In his book, The origin of species, Darwins stated that man evolved from a lower species of animal by a process of “natural selection” .  This would imply that man was not created by God. The bible on the other hand, informed in Genesis, that God formed man of the dust of the ground and breathed into his nostril the breath of life and man became a living being”. (Gen. 2:7). The implication of this would be, that man has not experienced the fall and therefore needs no redemption as recorded in Genesis 3.  That makes it clear, that Darwin's idea threatened the Christian doctrine of creation, fall and redemption. This statement implies that man is a direct product of an ape which is a lower animal or inferior to man. The implication of the evolution theory is that it calls to question man’s uniqueness and the authority given to him by God (Gen 2:28) How possible would it be for man to have dominion over an animal supposed to be his grandparents? The theory challenges the foundation of Christian or biblical account of man’s unique creation. Man was created in the image and likeness of God (Gen. 1:27). This implies that man was created by God to look like Him. But Darwin’s theory contradicts this biblical age long truth. Man was not created in the image and likeness of an ape, therefore it is not acceptable that he evolved from an ape with which he has no resemblance or similarity. The theory is fatal to human values. If we are descended from apes, then we should still be animals and apes.

The evolution theory has been refuted on scientific grounds and is as such invalid. It is a fantastic hypothesis lacking full factual evidence in any sense. It is an unproven, non-working hypothesis, which has not given any success in demonstrating what it set out to prove, and as such, is as well incompatible with the biblical account in Genesis, and so also incompatible with Christian beliefs. Anyone that tries to harmonize  Genesis with evolution, like theistic evolutionists, might overthink their views.... 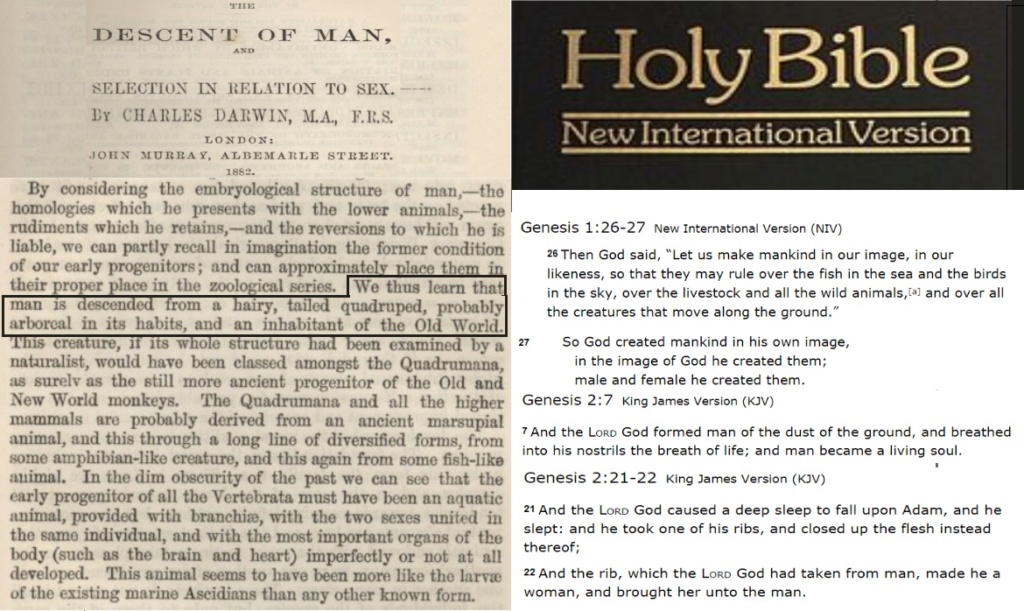 1. Biodiversity is explained by evolution. Its a fact confirmed by science. And common ancestry is true.
2. This demonstrates that Genesis is false. No creator required. And abiogenesis, science is still working on it, but with time, will find all the answers.
3. God is not necessary. We have a worldview, that makes sense.

Dawkins 1986: "Although atheism might have been logically tenable before Darwin, Darwin made it possible to be an intellectually fulfilled atheist" (Dawkins 1986, 6)
Sometimes, when I point out, that evolution is defended with such vehemence to deny God, atheists not rarely object that and say: No. Even the pope believes in evolution.
Truth said I have seen many atheists use evolution as a pretext to deny Gods existence.

https://www.apologeticscentral.co.za/articles/ERV.html
The naturalist assumes that God doesn’t exist, and then constructs a theory that tries to explain natural occurrences as best he can without God. He then proceeds to claim he has proved God doesn’t need to exist. The problem is that the theory will show no need of God if that is the assumption that was started with.

Evolution or micro-evolution is actually best described as adaptation, and a life-essential process, and had to be setup when life began:

Evolution takes supposedly thousands of years to gain an environmental advantage. So what environmental benefit would evolution supposedly provide, if adapting and responding to environmental stimuli is not only a life-essential process which had to be fully implemented when life began but, furthermore, a pre-programmed process based on information through signaling networks?

Organisms respond to short-term environmental changes by reversibly adjusting their physiology to maximize resource utilization while maintaining structural and genetic integrity by repairing and minimizing damage to cellular infrastructure, thereby balancing innovation with robustness. The cell’s initial response to a stressful stimulus is geared towards helping the cell to defend against and recover from the insult. 2 The fact that the cell’s survival critically depends on the ability to mount an appropriate response towards environmental or intracellular stress stimuli can explain why this reaction is highly conserved in evolution. The adaptive capacity of a cell ultimately determines its fate.

One of the reasons behind the evolutionary success of mammals (and other multicellular organisms) is their extraordinary capacity to adapt to changing environmental conditions. 3

Maybe the author should ask himself, how the Cell could have survived without the mechanism implemented from day one !!

Intelligent Design, the best explanation of Origins » Theory of evolution » Is Darwinism compatible with the Christian Faith ?