Intelligent Design, the best explanation of Origins » Origin of life » From the prebiotic recruitment of the basic building blocks to create life to the transition of their synthesis in living cells, a major problem without invoking design

From the prebiotic recruitment of the basic building blocks to create life to the transition of their synthesis in living cells, a major problem without invoking design

From the prebiotic recruitment of the basic building blocks to create life to the transition of their synthesis in living cells, a major problem without invoking design on Tue Jan 02, 2018 7:41 am

Posts : 4942
Join date : 2009-08-09
From the prebiotic recruitment of the basic building blocks to create life to the transition of their synthesis in living cells, a major problem without invoking design


For life to begin, the various organic molecules had to be recruited abiotically. That is, there was no biological process at hand to manufacture by life's machinery it's very own building blocks. RNA, amino acids, lipids, and carbohydrates are all synthesized by complex metabolic networks inside the cell. But there was no such machinery lying around randomly to do the job on a prebiotic earth as pre-job. The struggle to explain the origin of life begins to understand where these building blocks came from. For this reason, panspermia is one of the proposals. That the building blocks were "imported" from meteorites for example.

The Miller / Urey experiment, on the other hand, tried discharge experiments etc. to make just one of the building blocks, namely amino acids, with poor results ( nonetheless, even today heralded as proof that abiogenesis is possible ).  These building blocks had to be found in sufficient concentrations on earth, should not be annihilated by UV radiation, overcome the concomitant synthesis of undesired or irrelevant by-products, avoid the fact that water breaks down protein chains into amino acids, and somehow begin to chemically react and self-organize into interdependent complex form - and when the first living cell was created, find nutrition in form of glucose or starch - another huge problem, since these hydrocarbons are synthesized by photosynthesis - depending on cyanobacteria, or algae, which were not floating around yet. But let's suppose, the basic building blocks were there, all fully ready for action, and things would have had a go, naturally, by unguided random lucky events.

The challenge would be enormous to organize these molecules themselves to create the extremely complex metabolic irreducible structures permitting the transition and begin all life essential processes to start creating these molecules independently from recruiting them from the surroundings. But then, for some miraculous reason, matter would simply start ignoring fully ready molecules lying around on the surroundings,  to create living cells, and rather select the basic elements, like sulfur, iron, phosphor, calcium, ammonia , etc. and  import them by extraordinarily complex import mechanisms, like membrane channel proteins, non-ribosomal peptide forming molecular machines, and transform the raw materials into useful form and molecules essential for life. Fe3 would be transformed into Fe2, and then joined with Sulfur, Molybdenum, and other trace metals, to start making active centers for various proteins. by such complex processes, which are still today not fully understood. Instantly, it would have to manage to create the active centers of essential proteins like helicase, otherwise, DNA replication would not occur, and the miracle of creating life would be a one generation job, a single event, happening once, and immediately disappear.

The huge problem is that   Reproduction. Metabolism.  Nutrition, Organization. Growth and development. creating various informational codes used in cellular processes, especially the genetic code, Information content.  Hardware/software entanglement. error check and repair, homeostasis, Permanence, and change, had to emerge all at once, in one single rapid shot.  Another key aspect is that there had to be a transition from recruiting first single complex monomers, amino acids only in levorotatory form ( left handed ) and dextrorotatory form ( RNA and DNA ), carbohydrates, and lipids, and all, at the same time, form bioactive chains. In case of amino acids, first dipeptides, and then polypeptides. In case of RNA and DNA, first constructing the single nucleic acids, that is joining the sugar and the base, then add phosphor, make all four information-bearing molecules, purines, and pyrimidines in sufficient quantity, fine-tune them to match in size and form, able to do informational Watson–Crick base-pairing, and join them into polynucleotides. Sugars would have to form into Disaccharides, and then into polysaccharides ( carbohydrates ).The first process would have no enzymes at hand, and the make of ATP had to emerge also at the same time, and the delivery of ATP energy for chemical processes also, instantly. So the question is how long chains could and would be formed without disintegrating soon after.....

Yup. Making life is a complex conundrum - and much ignorance and blind belief are going strong with the ones that think that time is enough to explain the origin of life. The more I learn, the more I understand that abiogenesis research is a waste of money. And atheist fool themselves, whey they say: " We don't know yet how life came to be, but one day, science will find out ". - But, of course, it was no deity - saying, Goddidit - is invoking magic - and a placeholder for ignorance. Nope. It's not. God is the logical rational answer to anyone, that actually knows what is involved. 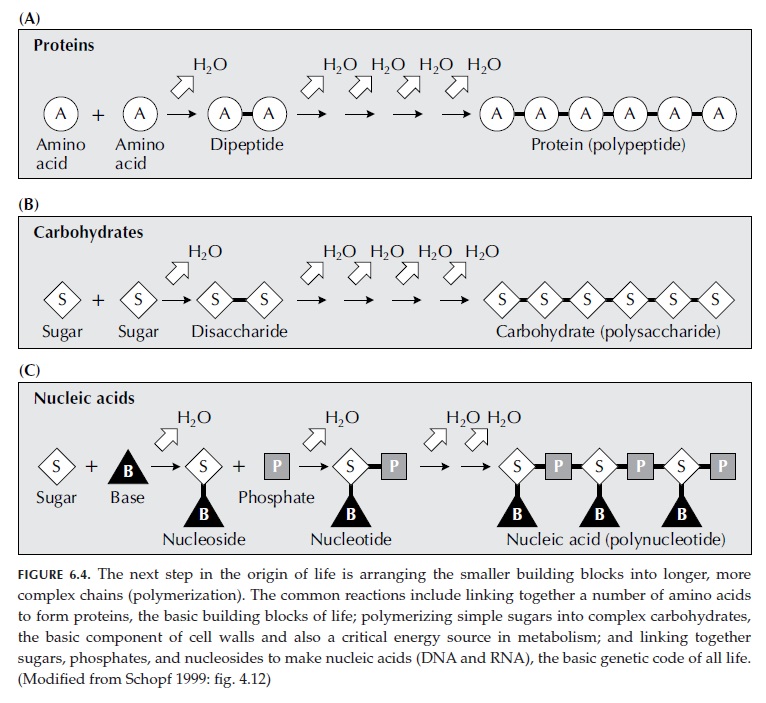 Intelligent Design, the best explanation of Origins » Origin of life » From the prebiotic recruitment of the basic building blocks to create life to the transition of their synthesis in living cells, a major problem without invoking design