Intelligent Design, the best explanation of Origins » The catalog of life » Spectacular Convergence: A Camera Eye in a Microbe

Spectacular Convergence: A Camera Eye in a Microbe


The little fellow I am gonna describe now has the most extraordinary and unbelievable eyes known, similar to camera eyes of vertebrates, and occupies one-third of its body weight. A science paper described its eyes as " the most elaborate photoreceptor organelle known in a unicellular organism ". Furthermore, it can point its eyes to different directions, and as such, is far more sophisticated than simple eyespots in Euglena. Its eyes can spot and detect polarised light, which helps even more to detect its prey. It contains lenses that function to concentrate light, AND - it doesn’t have a brain—or even a nervous system—but, nonetheless, it can see. Scientists have yet to fully understand how this single-celled organism might create an image of something without a brain.

It has a flagellum, which is described as " a piston, a fast contractile appendage unknown in any other organism, which is responsible for locomotion through successive extensions and contractions, and so, its speed is faster than any other dinoflagellates. Furthermore, the end of the piston possesses a "suction cup" able to attach the prey and place it into the posterior cavity for engulfing. It hunts by shooting out darts with stings. It has a sensory mechanism and can perceive when prey comes close.

Ladies and gentlemen - its name is Erythropsidinium

Multicellularity is often considered a prerequisite for morphological complexity, as seen in the camera-type eyes found in several groups of animals. A notable exception exists in single-celled eukaryotes called dinoflagellates, some of which have an eye-like ‘ocelloid’ consisting of subcellular analogs to a cornea, lens, iris, and retina.

Ocelloids consist of subcellular components resembling a lens, a cornea, iris-like rings, and a pigmented cup called the retinal body, which together so resemble the camera-type eyes of some animals that they have been speculated to be homologous.

The ocelloid is among the most complex subcellular structures known, but its function and evolutionary relationship to other organelles remain unclear. 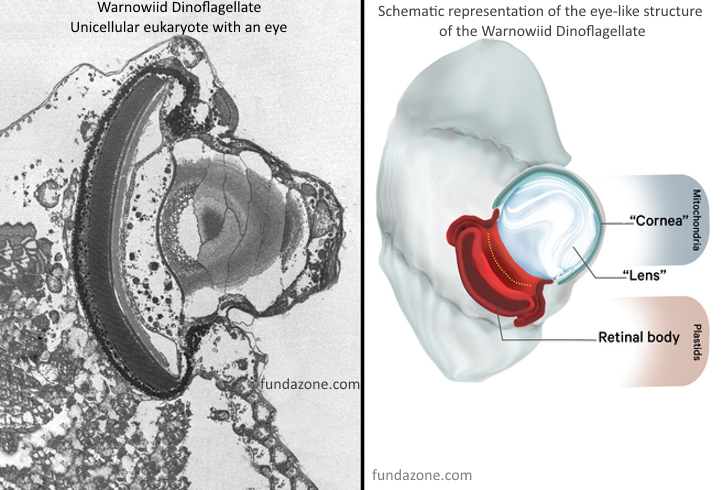 The “retina” of this eye, a curved array of chromosomes, appears arranged to filter polarized light. The news item from the Canadian Institute for Advanced Research quotes Brian Leander, co-supervisor of the project:
“The internal organization of the retinal body is reminiscent of the polarizing filters on the lenses of cameras and sunglasses,” Leander says. “Hundreds of closely packed membranes lined up in parallel.” 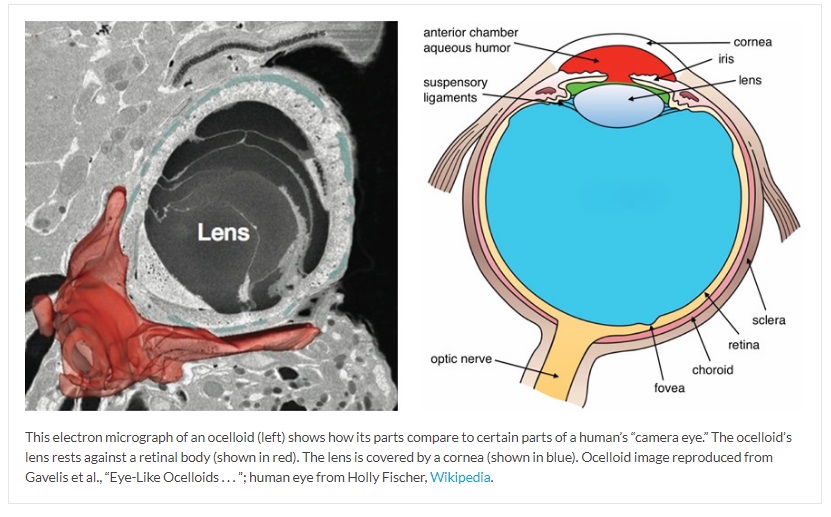 Seeing the Master Designer Through a Microbe’s Eye...

Inside a single-celled organism called a warnowiid is a sophisticated structure that looks just like an eye—an ocelloid. Ocelloids look so eye-like that, when they were first discovered in the warnowiid family of plankton, some thought they were eyes of jellyfish the plankton had eaten! Scientists led by University of British Columbia’s Brian Leander have found out what ocelloids are really made of. They believe their discoveries shed light on warnowiid evolution and the evolution of eyes.
The ocelloid is “an amazingly complex structure for a single-celled organism to have evolved,” says lead author Greg Gavelis. “It contains a collection of sub-cellular organelles that look very much like the lens, cornea, iris and retina of multicellular eyes found in humans and other larger animals. [http://bit.ly/1MHfdAH] No comparable assemblage resembling a camera eye has ever been found inside any other unicellular organism. While many have eyespots—dots of photoreceptor pigment that capture light and enable a cell to orient itself in response to the light’s direction and intensity—the ocelloid is unique.

Warnowiids are a family of dinoflagellates—a group of protozoans named for their whirling whip-like flagella. The many warnowiid species all have ocelloids. One even has ocelloids with multiple lenses. Warnowiids also exhibit other complex features. Some fire tiny harpoons analogous to the stinging harpoons jellyfish use to capture their dinner. Some have ballistic “pistons,” their function yet unknown. [Michael Le Page, “This Single-Celled Bug Has the World’s Most Extraordinary Eye,” New Scientist, June 16, 2015,] Some warnowiids can produce their own food through photosynthesis like plants do, but most species cannot.Because some warnowiids contain bits of other dinoflagellates, scientists suspect they consume their cousins. However, because warnowiids die when removed from their natural habitat, it is hard to study their behavior. Therefore, scientists have not yet seen exactly how they use their pistons and ocelloids. [Nature (Gavelis et al. “Eye-Like Ocelloids . . . ” doi:10.1038/nature14593) and from an additional study led by its senior author Dr. Brian Leander (Hoppenrath et al., “Molecular Phylogeny . . . ” doi:10.1186/1471-2148/9/116).]

So is the ocelloid a product of random evolution or a masterful design? Scientists cannot answer this question through direct observations. [http://bit.ly/1I3Z28t] As evolutionists try to explain how a structure like this ocelloid evolved, they naturally look at its components and how they are assembled. Therefore, if a scientist is convinced that all life forms that exist must have evolved, then it appears obvious that evolution built the ocelloid from these organelles. [http://bit.ly/1L4eEAI] The ocelloid story seems to them like a dramatic scenario, millions of years old, reenacting evolutionary steps practically before their eyes.


But the issue of irreducible complexity presents a problem for the evolutionists. Without instructions, the differentiation and assembly of multiple parts into a complex whole cannot plausibly happen. All the parts of a multicomponent structure like this would need to be in place for the ocelloid to work, yet each is a specialized form of an already complex structure. What evolutionary advantage could accrue to a proto-warnowiid from the evolution of the ocelloid’s separate parts? After all, in its chloroplast-like component the thylakoid membranes are configured the wrong way for an ordinary chloroplast. The apparent irreducible complexity of the ocelloid is more consistent with a biblical “God-created” worldview than with an evolutionary one.

While other unicellular organisms of the marine plankton are moving continuously, Erythropsidinium stays quiet, apparently observing around, even moving the ocelloid in different directions, and when disturbed it escapes moving vigorously the piston. No other organism in nature has a piston. Both organelles, the ocelloid and the piston, give a competitive advantage.
Erythropsidinium and other relatives with an ocelloid are found in the euphotic zone, illuminate layer, of the ocean, Gómez 2008, Eur. J. Protistology 44, 291-298. Obviously, they have a competitive advantage when light is available. It is widespread in the open ocean, but with low abundance usually less than 10 cells per liter. The transparency of the open ocean waters favors the visual predators with an ocelloid. However, even if Erythropsidinium is an efficient predator, the density of potential preys in the open ocean is low and it cannot reach high abundances. Coastal waters are more productive, higher density of potential preys. However, the turbidity reduces the transparency and visual predators are less competitive.

Studies based on transmission electron microscopy by Greuet in the late 1960´s revealed that the ocelloid of Erythropsidinium consist of a cornea-like surface layer, a lens-like structure, a retina-like structure with stacked membranes, and a pigment cup, all assembled in a single cell. Based on these observations, Gehring 2005, J. Hered. 96: 171-184, proposed a hypothesis for the origin of the eyes. He stated that because dinoflagellates are symbionts in corals, and other cnidarians, dinoflagellates, i.e. Symbiodinium, might have transferred the genes required for photoreception to the cnidarians, and further to other animal groups. However, this feature is not very common in the nature. Certainly, the probability of gene transfer would increase in organisms living in symbiosis. For example, if Erythropsidinium or their relatives could live in symbiosis with animals, we will have more reasons to consider the hypothesis of the gene transfer. Gómez et al. 2009, J. Eukaryotic Microbiol. 56, 440-445, provided the first gene sequence of Erythropsidinium. None of the close phylogenetic relatives of Erythropsidinium lives in symbiosis with animals. However, the results revealed that Erythropsidinium belongs to a group with photosynthetic dinoflagellates with chloroplasts of different origins. Greuet observed that the ocelloid looked like a chloroplast during its formation. We can interpret that Erythropsidinium is able to transform a chloroplast into an elaborate photoreceptor organelle. Although we cannot consider that Erythropsidinium has an eye. This evidences that eye-like structures converge into the same morphology and the complex photoreceptors have different origins in the evolution.

Intelligent Design, the best explanation of Origins » The catalog of life » Spectacular Convergence: A Camera Eye in a Microbe