The problem of information

Norbert Weiner - MIT Mathematician - Father of Cybernetics
"Information is information, not matter or energy. No materialism which does not admit this can survive at the present day."

For explaining the origin of life scientists must also explain the origin of specified information contained in each life form's unique DNA and RNA. Just like the whole universe, information is subject to entropy. See information entropy. When no information exists it is impossible for information to arise naturally in a mindless world. Information is more than just matter, it contains a message encoded by other parts of the cell. Like a language has a sender and a receiver who both understand the message and act according to it. Another irreducibly complex factor of life. On top of that meaningful information itself is not materially based. See also Semiotics. All communication and data processing, as is also done in the cell, is achieved through the use of symbols. When a computer processes code it has to decode it in order to convert the code into a corresponding action.

It has to be explained:

none of the above items can be explained by evolution since evolution depends on all this.

1. Regulation, governing, controlling, recruiting, interpretation, recognition, orchestrating, elaborating strategies, guiding, instruct are all tasks of the gene regulatory network.
2. Such activity can only be exercised if no intelligence is present if the correct actions were pre-programmed by intelligence.
3. Therefore, most probably, the gene regulatory network was programmed by an intelligent agency.

1. The setup of functional Information retrieval systems, like a library classification system, is always tracked back to intelligence
2. The gene regulatory network is a fully automated, pre-programmed, ultra-complex gene information extraction system
3. Therefore, its origin is best explained through intelligent setup

1. DNA stores information based on a code system, and codified, complex, instructional information, with the same function as a blueprint.
2. All codes and blueprints come from intelligence.
3. Therefore, the genetic code and the instructions to build cells and complex biological organisms, stored in DNA, were most likely created by an intelligent agency.

A calculation of the probability of spontaneous biogenesis by information theory
Hubert P. Yockey
The Darwin-Oparin-Haldane “warm little pond” scenario for biogenesis is examined by using information theory to calculate the probability that an informational biomolecule of reasonable biochemical specificity, long enough to provide a genome for the “protobiont”, could have appeared in 10^9 years in the primitive soup. Certain old untenable ideas have served only to confuse the solution of the problem. Negentropy is not a concept because entropy cannot be negative. The role that negentropy has played in previous discussions is replaced by “complexity” as defined in information theory. A satisfactory scenario for spontaneous biogenesis requires the generation of “complexity” not “order”. Previous calculations based on simple combinatorial analysis over estimate the number of sequences by a factor of 105. The number of cytochrome c sequences is about 3·8 × 10^61. The probability of selecting one such sequence at random is about 2·1 ×10^65. The primitive milieu will contain a racemic mixture of the biological amino acids and also many analogues and non-biological amino acids. Taking into account only the effect of the racemic mixture the longest genome which could be expected with 95 % confidence in 109 years corresponds to only 49 amino acid residues. This is much too short to code a living system so evolution to higher forms could not get started. Geological evidence for the “warm little pond” is missing. It is concluded that belief in currently accepted scenarios of spontaneous biogenesis is based on faith, contrary to conventional wisdom.
http://www.sciencedirect.com/science/article/pii/0022519377900443


The central problem in biology
http://reasonandscience.catsboard.com/t2826-the-central-problem-in-biology

Complex Specified/instructing Information – It’s not that hard to understand
http://reasonandscience.catsboard.com/t2374-complex-instructing-specified-information-its-not-that-hard-to-understand

The language of the genetic code
http://reasonandscience.catsboard.com/t1472-the-language-of-the-genetic-code

The five levels of information in DNA
http://reasonandscience.catsboard.com/t1311-the-five-levels-of-information-in-dna

Wanna Build a Cell? A DVD Player Might Be Easier
http://reasonandscience.catsboard.com/t2404-wanna-build-a-cell-a-dvd-player-might-be-easier

The various codes in the cell
http://reasonandscience.catsboard.com/t2213-the-various-codes-in-the-cell 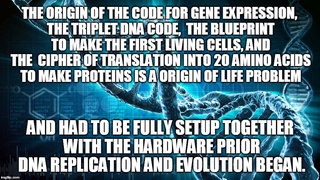 Re: Information: Main topics on complex, specified/instructional coded information in biochemical systems and life on Tue Oct 30, 2018 5:20 am

Admin
Posts : 4955
Join date : 2009-08-09
The Laws of information
1. Anything material such as physhical/chemical processes cannot create something non-material
2. Information is a non-material fundamental entity and not a property of matter
3. Information requires an material medium for storage and transmission
4. Information cannot arise fRom Statistical processes
5. There can be no information without a code ie. No knowledge can be shared without a code
6. All codes result from an intentional choice and agreement between sender and recipient
7. The determination of meaning for and from a set of symbols is a mental process that requires intelligence
8. There can be no new information without an intelligent purposeful sender
9. Any given chain of information can be traced back to an intelligent source
10. Information comprises the non-material foundation for all
a. Technological systems
b. Works of art
c. Biological systems