Intelligent Design, the best explanation of Origins » Philosophy and God » Imagine you would be the most genius inventor of all time

Imagine you would be the most genius inventor of all time 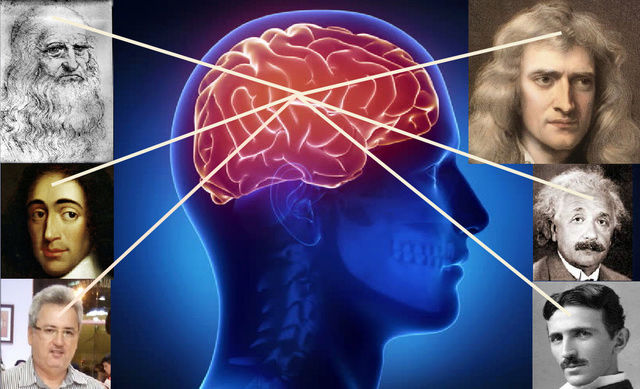 more intelligent than the most brilliant and intelligent men of all time, Faraday, Spinoza, DaVinci, Descartes, Galilei, Leibnitz, Newton, Tesla, Einstein, Goethe, and Grasso (i.Q 230 ) together, and responsible for the creation and invention of:

-The Sunway TaihuLight - the most powerful and fastest supercomputer on Earth, installed in China, with 125 petaflops, 10,649,600 cores, and 1.31 petabytes of primary memory, using 10.6 million cores, and five times faster than the fastest supercomputer in u.s.a.
-the world's smallest hard disk' with 500x more storage space than best hard drive,  manipulating chlorine atoms in order to store a kilobyte of data on a microscopic storage drive
-some of the most advanced computer programming languages, like Rust, which runs incredibly fast, SQL, JAVA, Python, C++, and a few more.
-the most Technologically Advanced, extreme Power Plant in the world, a hydropower plant like no other, able to generate as much electricity as a nuclear power plant and, at the flip of a switch, act as a giant battery.
-inventor of the World's largest concentrated solar plant, the Noor complex in Morocco
-the inventor and builder  of the most advanced manufacturing facility in der world, today Tesla's  NUMMI Plant in Fremont, California, accommodating 14000 workers, which on top would have the ability to self-replicate ( which adds a huge quantity of more complex processes ) with fully automated recognition mechanisms and gates that permit  only the right cargo in and out, which has sophisticated check and error detection mechanisms all along the production process,  the ability to compare correctly produced parts to faulty ones and discard the faulty ones, and repeat the process to make the correct ones ( no recall is ever required ) and all this process fully automated and pre-programmed,
- the Most Complicated Watch Ever Made, the Vacheron Constantin Reference 57260 pocket watch with 57 distinct complications, sold for a record of us$ 11 million

now imagine this creator would give you all his inventions as a free gift. And you would not only not recognize him for what he is, did, and gave you for free,  but deny and ignore him completely, as if he would not exist.
Furthermore, you would DESTRUCT his free gift, and blame him for a unperfect job.

How do you think would he feel with your behavior?

God is that inventor.
His creation and ingeniosity exceed all mentioned inventions described above, and any human invention by an unimaginable magnitude. He is incomparable to human intelligence and exceeds it incomprehensibly more, and we will be never able to scrutinize his mind imagine or fathom and comprehend it.

He made our body and each single cell in it, besides all kind of biological cells and millions of the most various multicellular organisms, including:

- The human brain (86 billion neurons) at 10^8,342 bits exceeding the bit capacity of the entire universe at 10^120 bits upon which a maximum of 10^90 bits could have been operated on in the last 14 billion years. In order to put such numbers into perspective, realize that the number of elementary particles (protons, neutron, electrons) in the physical universe is only 10^80. I have serious doubts—based on these numbers—that any input fails to be encoded in some way; but with what computer would we track all of that?  Position this more simply in terms of the fact that the storage capacity on just one human brain is equivalent to 10^8,419 modern computers. Its dense network of neurons apparently operates at a petaFLOPS or higher level. Yet the whole device fits in a 1-liter box and uses only about 10 watts of power
It houses 200 billion nerve cells, which are connected to one another via hundreds of trillions of synapses. Each synapse functions like a microprocessor, and tens of thousands of them can connect a single neuron to other nerve cells. In the cerebral cortex alone, there are roughly 125 trillion synapses, which is about how many stars fill 1,500 Milky Way galaxies.
- a gene regulatory and expression network and a transcription factor code, a  specific and pre-programmed code of gene expression which knows when, where and how to turn a gene on or off to be expressed, transcribed, and translated to produce specific cell products required in the cell for various tasks
- a nucleus, which stores DNA,  the smallest storage device possible and known, a trillion times denser than a CD, and far denser than the world's smallest hard disk,
- the genetic code, equivalent to a computer language, but 1 million times more robust than any comparable code, and less prone to errors
- encoding, transmission, and decoding of the information stored in DNA through a ultracomplex molecular machinery, like RNA polymerase, the Ribosome, chaperones etc.
- mitochondria, the power plant in the cell, which provides energy to your cells, with its amazing, almost 100% efficient ATP synthase machines,  far surpassing even the most advanced human technology
- photosynthesis, about 95% efficient when it comes to the first step of capturing light’s energy, far ahead of any human invented  solar photovoltaic system
- the cell, the most advanced factory,  the most detailed and concentrated organizational structure known to humanity
- circadian clocks, or circadian oscillators, are a biochemical oscillator that oscillates with a stable phase relationship to solar time

But humankind misuses his creation, and people destroy their bodies, many destroy it with drugs, alcohol, various kinds of addictions, plastic surgeries, sex change, and forget completely about our creator,  and that our body, the earth, and all creation is not ours, but we are only administrators of it, besides our time, and all goods we have. We are accountable for all we do.

But God in his foreknowledge knew we would decide against him, and provided a solution for all destruction he knew we would provoke.  The bible says that this universe one day will be destroyed in flames, and he will create a new place, that is perfect, immaculate, and eternal.  And he invites us to become residents there in the future. All depends on us if we want to join and go there, or not.

All Things Made New
Apocalypse 21 Now I saw a new heaven and a new earth, for the first heaven and the first earth had passed away. Also, there was no more sea. 2 Then I, John,[a] saw the holy city, New Jerusalem, coming down out of heaven from God, prepared as a bride adorned for her husband. 3 And I heard a loud voice from heaven saying, “Behold, the tabernacle of God is with men, and He will dwell with them, and they shall be His people. God Himself will be with them and be their God. 4 And God will wipe away every tear from their eyes; there shall be no more death, nor sorrow, nor crying. There shall be no more pain, for the former things have passed away.” 5 Then He who sat on the throne said, “Behold, I make all things new.” And He said to me, “Write, for these words are true and faithful.” 6 And He said to me, “It is done![c] I am the Alpha and the Omega, the Beginning and the End. I will give of the fountain of the water of life freely to him who thirsts.

Visit my salvation page, and learn how you can become a resident of this place:
How you can get Saved!
http://reasonandscience.catsboard.com/t2501-getting-saved

Biological Cells incorporate all this, with sublime excellence, fully automated, auto replicating for thousands of years, but chance and unguided lucky events in the past implemented them ?

Organic Production Systems: What the Biological Cell Can Teach Us About Manufacturing
http://pubsonline.informs.org/doi/pdf/10.1287/msom.1030.0033

Intelligent Design, the best explanation of Origins » Philosophy and God » Imagine you would be the most genius inventor of all time