One essential prokaryotic cell function is the transport of proteins from the cytoplasm into other compartments of the cell, the environment, and/or other bacteria or eukaryotic cells — a process known as protein secretion. Prokaryotes have developed numerous ways of transporting protein cargo between locations, which largely involve the assistance of dedicated protein secretion systems. Protein secretion systems are essential for the growth of bacteria and are used in an array of processes. Some secretion systems are found in almost all bacteria and secrete a wide variety of substrates, while others have been identified in only a small number of bacterial species or are dedicated to secreting only one or a few proteins.  There are several different classes of bacterial secretion systems, and their designs can differ based on whether their protein substrates cross a single phospholipid membrane, two membranes, or even three membranes, where two are bacterial and one is a host membrane. 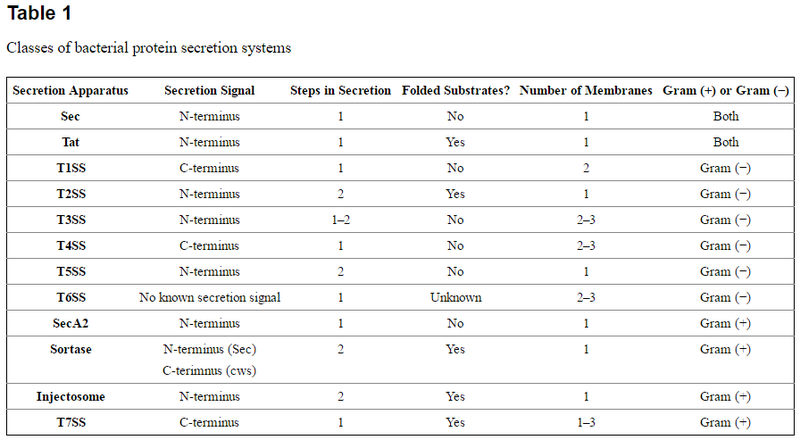 The general secretion (Sec) and twin arginine translocation (Tat) pathways are the bacterial secretion systems most commonly used to transport proteins across the cytoplasmic membrane. The Sec and Tat pathways are the most highly conserved mechanisms of protein secretion, and have been identified in all domains of life (bacteria, archaea, and eukarya) . Most proteins transported by the Sec and Tat pathways remain inside of the cell, either in the periplasm or the inner membrane. However, in Gram-negative bacteria, proteins delivered to the cytoplasmic membrane or periplasm of the cell by the Sec or Tat pathways can either stay in those compartments, or may be transported outside of the cell with the help of another secretion system. While the Sec and Tat systems have several common elements, they transport proteins by fundamentally different mechanisms.


The Sec pathway primarily translocates proteins in their unfolded state. This system consists of three parts:

Additionally, a number of Gram-positive bacteria produce Sec accessory proteins that serve important roles in the secretion of specific proteins. While proteins secreted by the Sec apparatus can serve many roles, a number of proteins that promote virulence of bacterial pathogens are transported through this pathway. .

Export by the Sec pathway relies on a hydrophobic signal sequence at the N-terminus of the secreted protein, which is typically 20 amino acids in length and contains 3 regions:

a positively charged amino terminal,
a hydrophobic core, and
a polar carboxyl-terminal.

Signal peptide
A signal peptide (sometimes referred to as signal sequence, targeting signal, localization signal, localization sequence, transit peptide, leader sequence or leader peptide) is a short (5-30 amino acids long) peptide present at the N-terminus of the majority of newly synthesized proteins that are destined towards the secretory pathway.[1] These proteins include those that reside either inside certain organelles (the endoplasmic reticulum, golgi or endosomes), secreted from the cell, or inserted into most cellular membranes. Although most type I membrane-bound proteins have signal peptides, the majority of type II and multi-spanning membrane-bound proteins are targeted to the secretory pathway by their first transmembrane domain, which biochemically resembles a signal sequence except that it is not cleaved.

In prokaryotes, signal peptides direct the newly synthesized protein to the SecYEG protein-conducting channel, which is present in the plasma membrane. A homologous system exists in eukaryotes, where the signal peptide directs the newly synthesized protein to the Sec61 channel, which shares structural and sequence homology with SecYEG, but is present in the endoplasmic reticulum. Both the SecYEG and Sec61 channels are commonly referred to as the translocon, and transit through this channel is known as translocation. While secreted proteins are threaded through the channel, transmembrane domains may diffuse across a lateral gate in the translocon to partition into the surrounding membrane.

The cell membrane has many indispensable functions for sustaining cell alive besides a role as merely outer envelope. The most of such functions are implemented by membrane embedded proteins that are emerged through the membrane integration machinery, SecYEG translocon. 2 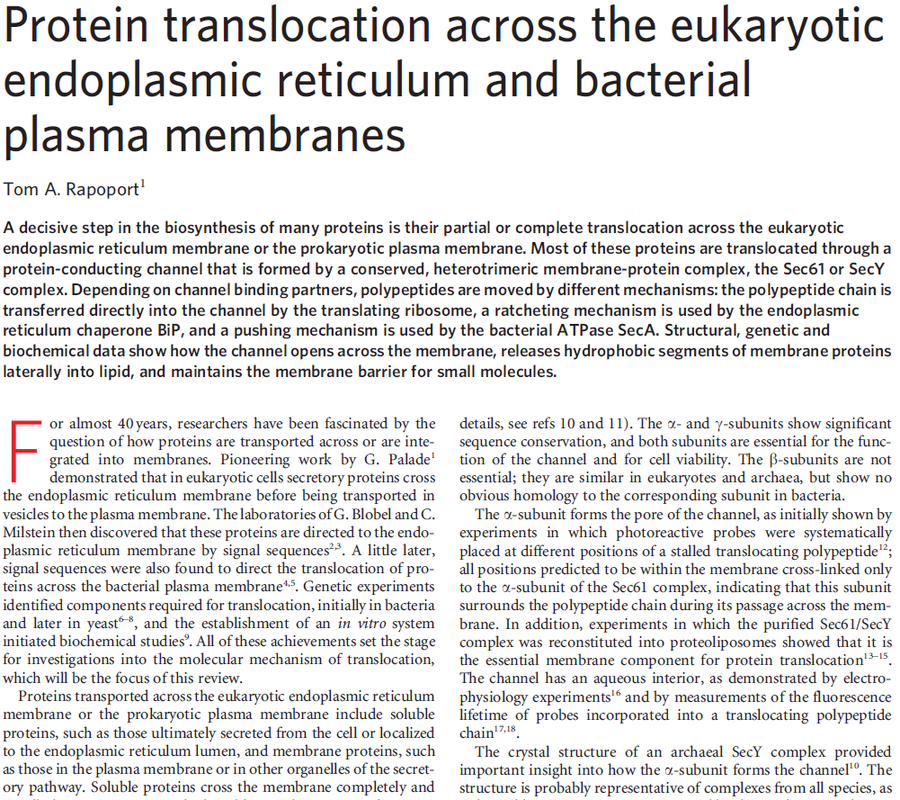 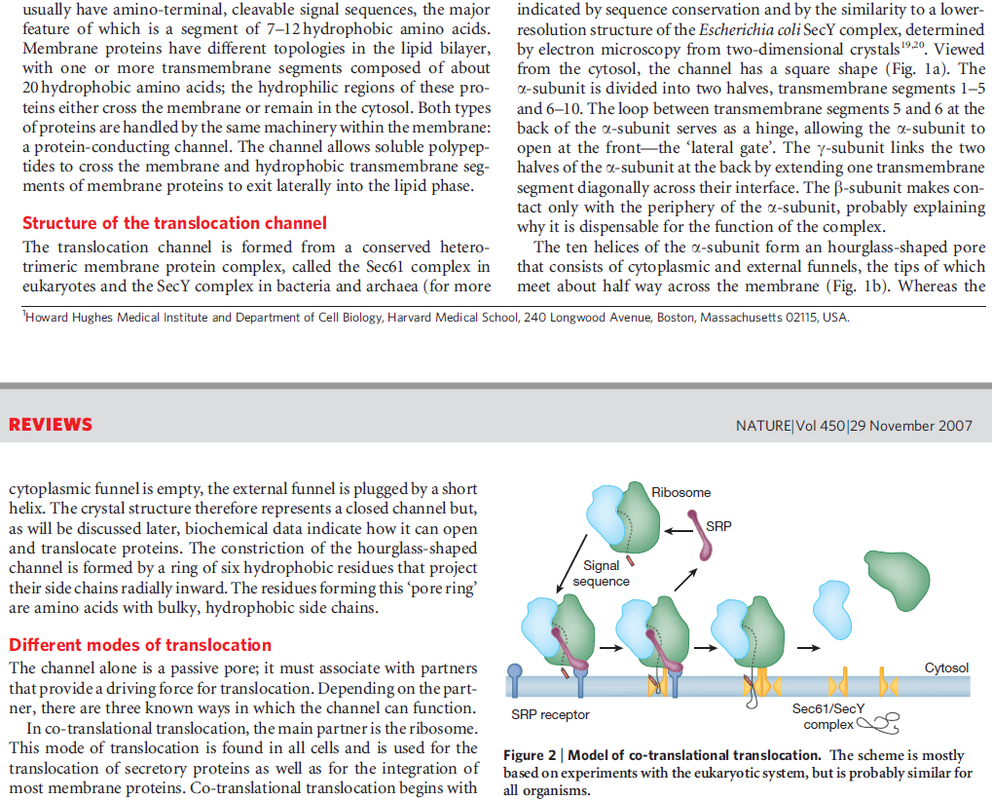 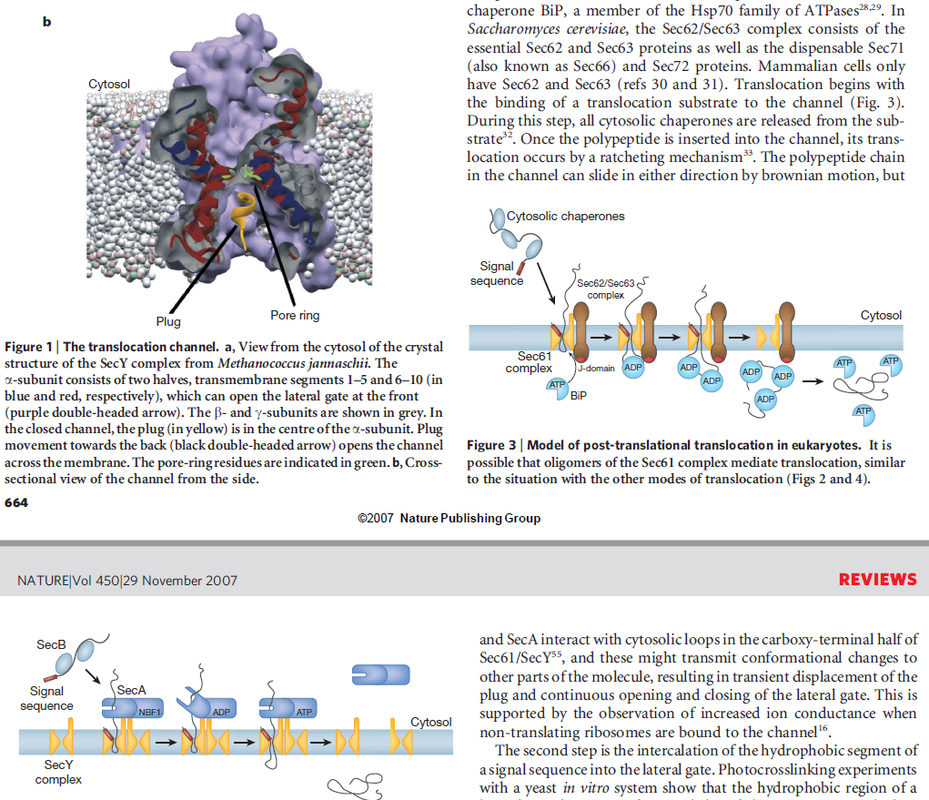 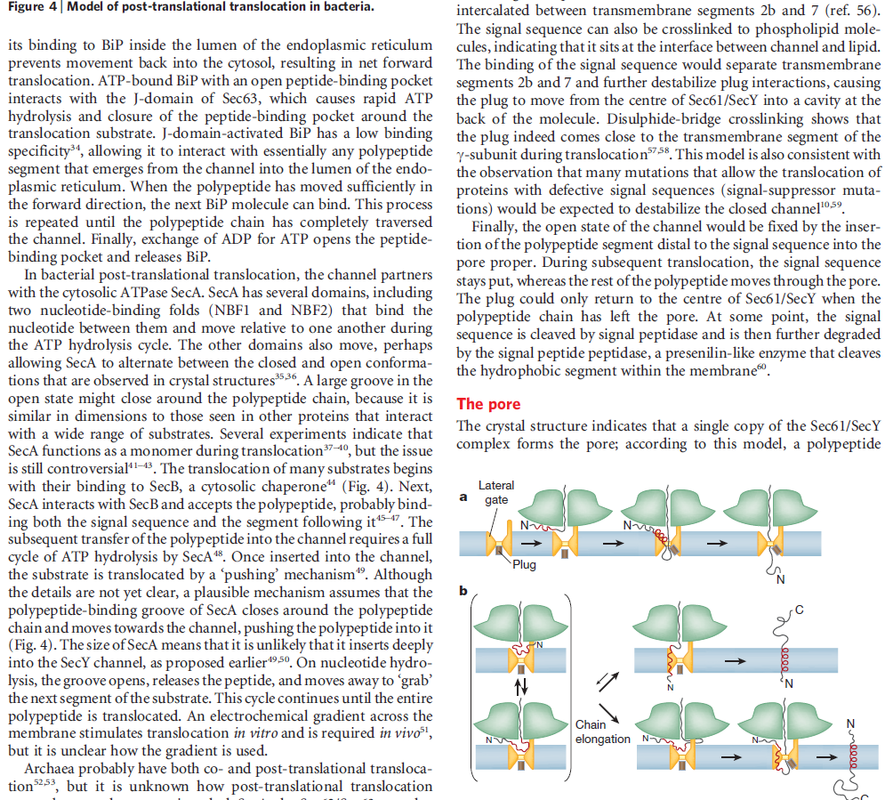 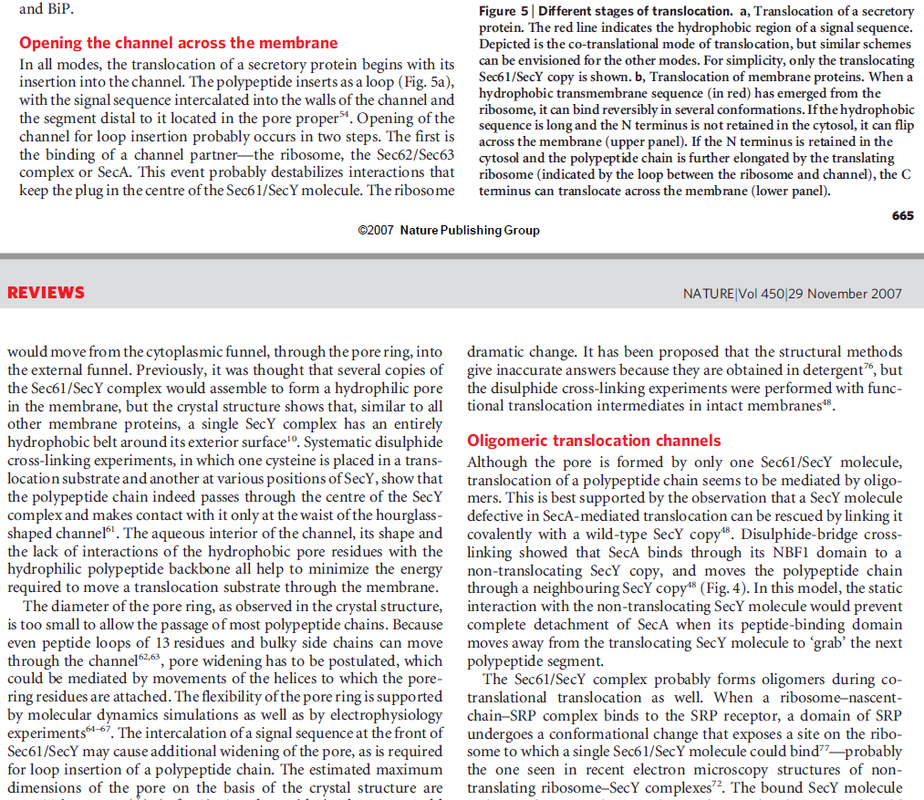 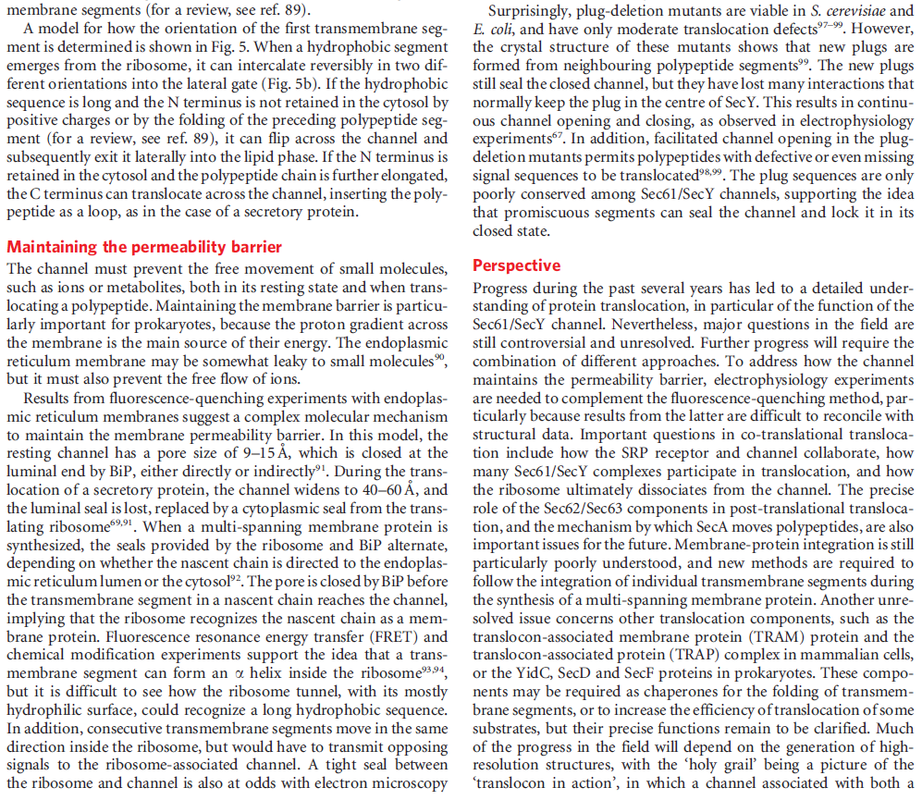 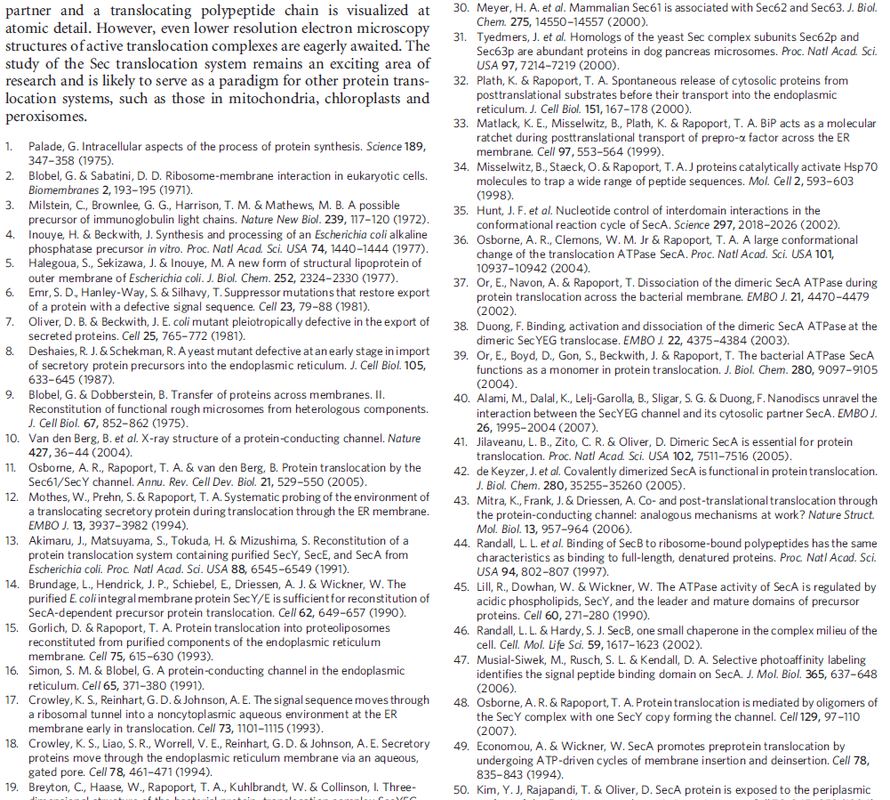 
The SecB pathway
In many Gram-negative bacteria, proteins destined for transport to the periplasm or outside of the cell contain a removable signal sequence recognized by the SecB protein (Fig 1A). 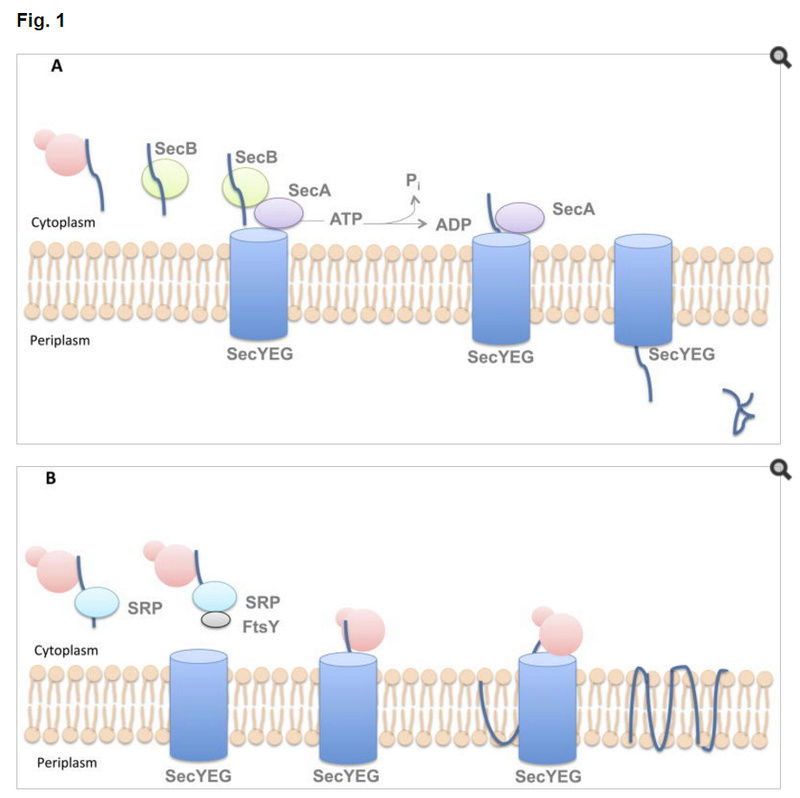 Export through the Sec pathway
In bacteria, the Sec pathway transports unfolded proteins across the cytoplasmic membrane. Proteins secreted by this pathway may either become embedded in the inner membrane, or will be released into the periplasm. In Gram-negative organisms, these periplasmic proteins may be released extracellularly with the help of an additional secretion system.
(A) Proteins destined for the periplasm (or extracellular release) are translocated by a post-translational mechanism and contain a removable signal sequence recognized by the SecB protein. SecB binds pre-secretory proteins and prevents them from folding, while also delivering its substrates to SecA. SecA both guides proteins to the SecYEG channel, and also serves as the ATPase that provides the energy for protein translocation. Following transport through the SecYEG channel, proteins are folded in the periplasm.
(B) The Sec pathway utilizes a co-translational mechanism of export to secrete proteins destined for the inner membrane. These proteins contain a signal sequence recognized by the SRP particle. During translation, SRP binds target proteins as they emerge from the ribosome, and recruits the docking protein FtsY. FtsY delivers the ribosome-protein complex to the SecYEG channel, which translocates the nascent protein across the cytoplasmic membrane. During translocation across the channel, the transmembrane domain is able to escape through the side of the channel into the membrane, where the protein remains attached.

This protein serves as a chaperone, binding to pre-secretory proteins and preventing them from folding . SecB then delivers its substrates to SecA, a multi-functional protein that both guides proteins to the SecYEG channel, and also serves as the ATPase that provides the energy for protein translocation. Prior to transport through the channel, a protease protein cleaves off the SecB signal sequence from the protein, and the secreted protein is then is folded upon delivery to the periplasm. While many proteins delivered by the SecB system remain in the periplasm, some will ultimately become extracellular. Once these proteins are delivered to the periplasm, they can be transported across the outer membrane with the help of the Type II and Type V secretion systems.

The SRP pathway
The Sec system can also transport proteins that are meant to remain in the inner membrane by way of the SRP pathway (Fig 1B). Transmembrane proteins often contain hydrophobic domains, and thus are unstable when cytoplasmic. For this reason, secretion by the SRP pathway utilizes a co-translational mechanism of export that couples translation of the protein by the ribosome with secretion through the SecYEG channel. The SRP pathway relies on the SRP particle, which contains a small, 4.5S RNA bound to a protein called Ffh. During protein secretion by this pathway, SRP first binds the transmembrane domain of proteins as they emerge from the ribosome. SRP then binds the docking protein FtsY, which delivers the ribosome-protein complex to the SecYEG channel. Translation of the protein then drives the secretion of the nascent protein through the channel. During this process, the transmembrane domain of the protein escapes through the side of the channel into the membrane, where it remains attached. The mechanism of this final step is not yet known.