Intelligent Design, the best explanation of Origins » Molecular biology of the cell » Actin filament assembly , and how its complex engineering process points to intelligent design

Actin filament assembly , and how its complex engineering process points to intelligent design

Actin filament assembly , and how its complex engineering process points to intelligent design on Mon Nov 07, 2016 7:58 am

Actin is a family of globular multi-functional proteins that form microfilaments. It is found in essentially all eukaryotic cells (the only known exception being nematode sperm), where it may be present at a concentration of over 100 μM. An actin protein's mass is roughly 42-kDa, with a diameter of 4 to 7 nm, and it is the monomeric subunit of two types of filaments in cells: microfilaments, one of the three major components of the cytoskeleton, and thin filaments, part of the contractile apparatus in muscle cells. It can be present as either a free monomer called G-actin (globular) or as part of a linear polymer microfilament called F-actin(filamentous), both of which are essential for such important cellular functions as the mobility and contraction of cells during cell division.

The actin cytoskeleton performs a wide range of functions in diverse cell types. Each actin subunit, sometimes called globular or G-actin, is a 375-amino-acid polypeptide carrying a tightly associated molecule of ATP or ADP (Figure16–11A). 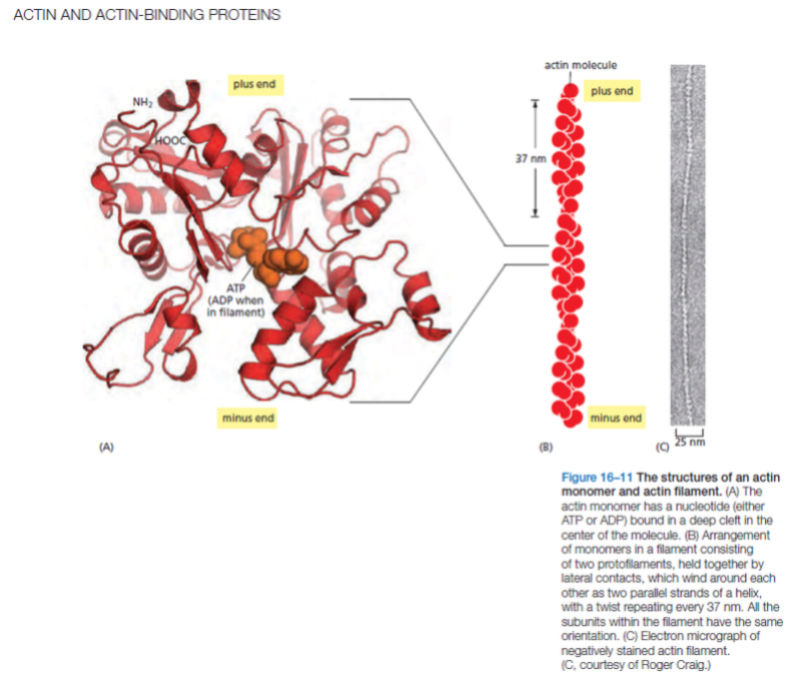 Actin is extraordinarily well conserved among eukaryotes. The amino acid sequences of actins from different eukaryotic species are usually about 90% identical. Small variations in actin amino acid sequence can cause significant functional differences: In vertebrates, for example, there are three isoforms of actin, termed α, β, and γ, that differ slightly in their amino acid sequences and have distinct functions. α-Actin is expressed only in muscle cells, while β- and γ-actins are found together in almost all non-muscle cells.

Actin subunits assemble head-to-tail to form a tight, right-handed helix, forming a structure about 8 nm wide called filamentous or F-actin (Figure 16–11B and C). Because the asymmetrical actin subunits of a filament all point in the same direction, filaments are polar and have structurally different ends: a slower-growing minus end and a faster-growing plus end. The minus end is also referred to as the “pointed end” and the plus end as the “barbed end,” because of the “arrowhead”appearance of the complex formed between actin filaments and the motor protein myosin (Figure 16–12).

Within the filament, the subunits are positioned with their nucleotide-binding cleft directed toward the minus end. Individual actin filaments are quite flexible. The stiffness of a filament can be characterized by its persistence length, the minimum filament length at which random thermal fluctuations are likely to cause it to bend. The persistence length
of an actin filament is only a few tens of micrometers. In a living cell, however, accessory proteins cross-link and bundle the filaments together, making largescale actin structures that are much more rigid than an individual actin filament.

The regulation of actin filament formation is an important mechanism by which cells control their shape and movement. Small oligomers of actin subunits can assemble spontaneously, but they are unstable and disassemble readily because each monomer is bound to only one or two other monomers. For a new actin filament to form, subunits must assemble into an initial aggregate, or nucleus, that is stabilized by multiple subunit–subunit contacts and can then elongate rapidly by addition of more subunits. This process is called filament nucleation. Many features of actin nucleation and polymerization have been studied with purified actin in a test tube (Figure 16–13). 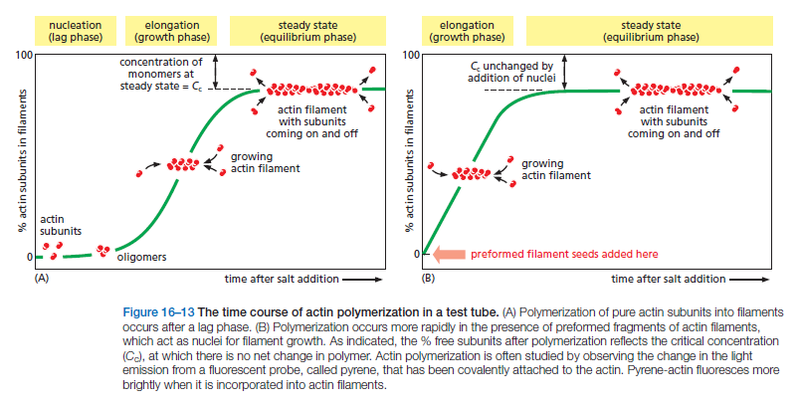 The instability of smaller actin aggregates creates a kinetic barrier to nucleation. When polymerization is initiated, this barrier results in a lag phase during which no filaments are observed. During this lag phase, however, a few of the small, unstable aggregates succeed in making the transition to a more stable form that resembles an actin filament. This leads to a phase of rapid filament elongation during which subunits are added quickly to the ends of the nucleated filaments (Figure 16–13A). Finally, as the concentration of actin monomers declines, the system approaches a steady state at which the rate of addition of new subunits to the filament ends exactly balances the rate of subunit dissociation. The concentration of free subunits left in solution at this point is called the critical concentration, Cc. As explained in Panel 16–2, the value of the critical concentration is equal to the rate constant for subunit loss divided by the rate constant for subunit addition—that is, Cc = koff/kon, which is equal to the dissociation constant, Kd, and the inverse of the equilibrium constant, K

Due to the uniform orientation of asymmetric actin subunits in the filament, the structures at its two ends are different. This orientation makes the two ends of each polymer different in ways that have a profound effect on filament growth rates. The kinetic rate constants for actin subunit association and dissociation—kon and koff, respectively—are much greater at the plus end than the minus end. This can be seen when an excess of purified actin monomers is allowed to assemble onto polarity-marked filaments—the plus end of the filament elongates up to ten times faster (see Figure 16–12). If filaments are rapidly diluted so that the free subunit concentration drops below the critical concentration, the plus end also depolymerizes faster.

It is important to note, however, that the two ends of an actin filament have the same net affinity for actin subunits, if all of the subunits are in the same nucleotide state. Addition of a subunit to either end of a filament of n subunits results in a filament of n + 1 subunits. Thus, the free-energy difference, and therefore the equilibrium constant (and the critical concentration), must be the same for addition of subunits at either end of the polymer. In this case, the ratio of the rate constants, koff/kon, must be identical at the two ends, even though the absolute values of these rate constants are very different at each end . The cell takes advantage of actin filament dynamics and polarity to do mechanical work. Filament elongation proceeds spontaneously when the free-energy change (ΔG) for addition of the soluble subunit is less than zero. This is the case when the concentration of subunits in solution exceeds the critical concentration. A cell can couple an energetically unfavorable process to this spontaneous process; thus, the cell can use free energy released during spontaneous filament polymerization to move an attached load. For example, by orienting the fast-growing plus ends of actin filaments toward its leading edge, a motile cell can push its plasma membrane forward.

Intelligent Design, the best explanation of Origins » Molecular biology of the cell » Actin filament assembly , and how its complex engineering process points to intelligent design