‘Planar polarity’ refers to any manifestation of polarity within a two-dimensional surface. Nübler-Jung (Nübler-Jung, 1987) introduced this term to describe the spatial organisation of polarised structures such as bristles on the insect cuticle. Planar polarity is a common property of animal tissues (Fig. 1) that is most obvious when cells are organised in epithelial sheets, where it is defined as polarity in a plane other than the apicobasal axis, but can also be seen in non-epithelial tissues. [For definitions of planar polarity, see Adler and others (Adler, 2002; Lewis and Davies, 2002; Lawrence et al., 2007; Wang and Nathans, 2007).]
Planar polarity is most frequently studied at the level of individual cells, for example in the Drosophila wing, or in the organisation of multicellular structures, such as ommatidia in the fly eye or hair follicles in mammalian skin (Fig. 1A,B,F). This level of organisation is often referred to as ‘planar cell polarity’ (PCP). However, planar polarity also exists at the subcellular level, for example in the common orientation of cilia on a multiciliated cell (Fig. 1C), as well as in whole tissues, as in the common distal polarisation of fly wing hairs and mouse limb hairs (Fig. 1A,F). For these reasons, we prefer the more general term ‘planar polarity’. 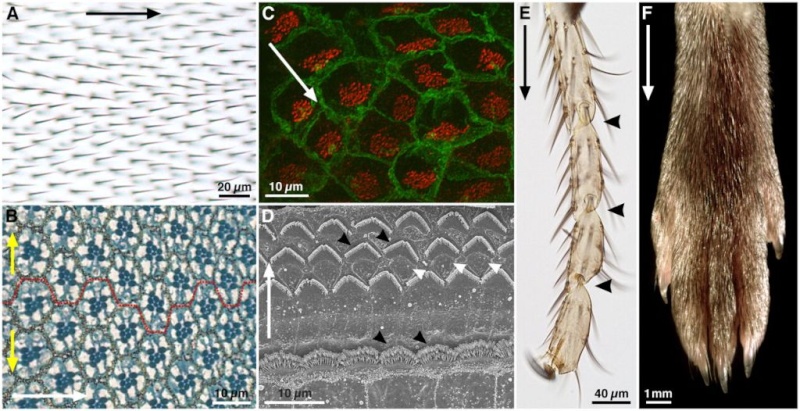 Fig. 1.
Examples of planar polarity in flies and mice.
(A) Adult Drosophila wing surface. Planar polarity is evident in the organization of trichomes on the proximodistal (PD) axis (black arrow).
(B) Sub-apical section through an adult Drosophila eye at the dorsoventral (DV) midline. Each eye facet comprises a group of ~20 cells (an ommatidium). In this section plane, the pigmented rhabdomeres (dark blue) of seven photoreceptors are in the centre of each ommatidium. Ommatidia are hexagonally tesselated and show mirror-image symmetry around the DV midline (broken red line), revealing axes of planar polarity on the anteroposterior (AP, white arrow) and DV (yellow arrows) axes.
(C) Confocal image of mouse brain ependymal cells, with cell membranes stained for β-catenin (green) and cilia basal bodies for γ-tubulin (red). In each cell, basal bodies are displaced towards one side (white arrow), creating ‘translational’ polarity.
(D) Scanning electron micrograph of an adult mouse organ of Corti. Planar polarity is seen on the mediolateral axis (white arrow), in the arrangement of the hair cell stereocilia (black arrowheads). Support cells between the hair cells (white arrowheads) show no overt morphological polarisation.
(E) Tarsal joints of an adult Drosophila leg. Planar polarity is evident on the PD axis (black arrow) through the polarisation of bristles and the joints (black arrowheads).
(F) Distal end of an adult mouse leg, showing the PD polarised arrangement of the fur. Images courtesy of Dr Henry Ho (C), Dr XuDong Wu (D) and Dr Cindy Lu (F), unpublished. (A,B,E) D.S., unpublished.

This review aims to summarise our current knowledge of how planar polarity is established, emphasising the common mechanisms at work across the animal kingdom. We discuss how planar polarity arises in a range of contexts, in each case requiring polarised cell-cell interactions that align cells with their immediate neighbours and long-range patterning events that orient this polarisation with the axes of the tissue. For reasons of space, the only invertebrate considered is the well-studied dipteran Drosophila melanogaster. However, planar polarity has been studied in diverse insects (for a review, see Strutt, 2009), as well as in ascidians (e.g. Jiang et al., 2005), planarians (Almuedo-Castillo et al., 2011) and worms (for reviews, see Walston and Hardin, 2006; Segalen and Bellaïche, 2009). Using the example of the Drosophila wing, we define a framework for how planar polarity is established in epithelial tissues. To facilitate comparisons across species, we provide an operational definition for the term ‘planar polarity’, and in this light review a range of planar polarity processes identified in vertebrates. Finally, we consider the intriguing and recently discovered relationship between planar polarity and cilia function in vertebrates. As most planar polarised cells in Drosophila are non-ciliated, we discuss how these studies in vertebrates provide unique insights into planar polarity establishment.

The basics of planar polarity specification

Planar polarity studies began in the insect cuticle in the 1940s, and were followed by extensive genetic analysis in Drosophila (e.g. Gubb and García-Bellido), with the wing being particularly well characterised. A key advantage of the wing is its simplicity, with each cell in a monolayer epithelium adopting a polarity that is easily discerned by the presence of a single distally pointing trichome (a small hair, see Fig. 1A,Fig. 2B). To provide a framework for understanding planar polarity establishment, we first describe what has been learnt about this from the Drosophila wing, given the strong evidence that the principles seen in the wing are conserved across tissues and species. Two main cellular systems govern the cell-cell interactions that underlie the local alignment of cell polarity in the wing: the so-called ‘core’ planar polarity pathway (often just referred to as the ‘planar polarity pathway’ or ‘PCP pathway’) and the Fat/Dachsous (Ft/Ds) system. Both act to generate asymmetric cell-cell contacts through heterophilic interactions between cell-surface proteins, which exhibit asymmetric subcellular activities and/or distributions.

Six proteins have been placed in the core pathway in flies, owing to their similar activities and colocalisation to the adherens junction (AJ) region of cells, where they form a putative intercellular complex (Fig. 2A). From early in wing development, the core proteins exhibit asymmetric subcellular localisations that are particularly prominent when trichomes form. At this stage, the seven-pass transmembrane protein Frizzled (Fz) is confined to distal cell junctions along with the cytosolic proteins Dishevelled (Dsh) and Diego (Dgo), whereas the four-pass transmembrane protein Strabismus (Stbm, also known as Van Gogh; Vang – FlyBase) and the cytosolic protein Prickle (Pk) are localised proximally; the seven-pass transmembrane cadherin Flamingo (Fmi, also known as Starry Night; Stan – FlyBase) is present both distally and proximally (Fig. 2A,B) (for a review, see Strutt and Strutt, 2009). Complete loss of activity of any of the core proteins leads to a loss of planar polarity, with trichomes initiating in the cell centre (Fig. 2B) (Wong and Adler, 1993).