The Earthquake and Jesus' Crucifixion

The Earthquake and Jesus' Crucifixion 1


I commented last Friday (Earthquake Research and the Day of Jesus' Crucifixion) on a Discover News Article Quake Reveals Day of Jesus' Crucifixion.  I was somewhat sceptical about the article's claim that earthquake research had helped to pinpoint the day of the crucifixion, not least because the article appeared to suggest a ten year window for the earthquake in question (26-36 CE) but also because of all the passages in Matthew's Gospel, this is one that causes the historian to raise an eyebrow.

I was grateful to hear subsequently from the primary author of the article that had given rise to the Discovery News report, Jefferson Williams.  And over the last few days, it has been a pleasure to exchange emails and to get a feeling for his research.  Our new dean at Duke is often telling us about the importance of interdisciplinary work, and perhaps this is one of those occasions when the arts and sciences come together in a surprising way!

After having corresponded with Dr Williams, I find myself reassured that his approach does not fall into the "Science proves religion" camp.  It is clearly not an attempt to engage in careful scientific research with a view to the alleged corroboration of details found in the Bible.  Indeed, it is clear that his approach is open and exploratory, and is essentially asking questions about possible correlations between the broad dates suggested by his research alongside textual data that may or may not witness to the same events.

The details of the article are Jefferson B. Williams, Markus J. Schwab & A. Brauer, "An early first-century earthquake in the Dead Sea," International Geology Review 54/ 10 (2011): 1219-28.  I am sure it goes without saying that I have no expertise whatsoever in Geology and earthquake research and my comments will deal solely with the article as it relates to the study of the New Testament.  Here is the abstract:


This article examines a report in the 27th chapter of the Gospel of Matthew in the New Testament that an earthquake was felt in Jerusalem on the day of the crucifixion of Jesus of Nazareth. We have tabulated a varved chronology from a core from Ein Gedi on the western shore of the Dead Sea between deformed sediments due to a widespread earthquake in 31 BC and deformed sediments due to an early first-century earthquake. The early first-century seismic event has been tentatively assigned a date of 31 AD with an accuracy of ±5 years. Plausible candidates include the earthquake reported in the Gospel of Matthew, an earthquake that occurred sometime before or after the crucifixion and was in effect ‘borrowed’ by the author of the Gospel of Matthew, and a local earthquake between 26 and 36 AD that was sufficiently energetic to deform the sediments at Ein Gedi but not energetic enough to produce a still extant and extra-biblical historical record. If the last possibility is true, this would mean that the report of an earthquake in the Gospel of Matthew is a type of allegory.

I had wondered about the strange coincidence between the decade of Pontius Pilate's governorship (26-36 CE) and the date range for this earthquake, also roughly 26-36.  However, it seems that this was accurately reported in the Discovery News article.

What was much less accurately conveyed in that piece was the implication that this research helped to pinpoint the date of the crucifixion.  If anything, the flow of interpretation goes in the opposite direction.  Williams and his co-authors in fact have a date range of "31 AD with an accuracy of ±5 years" and, having established this, they inquire about possible candidates in the textual record, one of which is the earthquake mentioned in Matt. 27.51. The authors conclude their article in the following manner:


This leaves three possibilities for the cause of the 26–36 AD earthquake observed in the Ein Gedi section:

(1) the earthquake described in the Gospel of Matthew occurred more or less as reported;

(2) the earthquake described in the Gospel of Mathew was in effect ‘borrowed’ from an earthquake that occurred sometime before or after the crucifixion, but during the reign of Pontius Pilate;

(3) the earthquake described in the Gospel of Matthew is allegorical fiction and the 26–36 AD seismite was caused by an earthquake that is not reported in the currently extant historical record. (

In other words, the article is not an attempt to find scientific corroboration for the events that are described with such apocalyptic flourish in Matthew 27.

Nevertheless, if Biblical scholars like us are right about Marcan Priority and right to be sceptical about the historical value of Matthew's redactional embellishments here, it is at least a delightful detail that there was indeed an earthquake in the region in roughly the right time period.  It is intriguing to think that Matthew may have been redacting Mark with some kind of knowledge of an earthquake in the period.

Perhaps that was what stimulated the imagination of the evangelist, or his tradition, as they retold the Marcan story.  I must admit that I do find that an attractive hypothesis.  However, the reluctant sceptic in me suspects that Matthew was able to add an earthquake in 27.51 without that precedent.  The fact that he introduces another in 28.2, at the resurrection, inclines one to think that this is simply the way that Matthew writes.

Williams et al suggest that this earthquake, in Matt. 28.2, could be understood as "an aftershock event" (7).  However, Matthew also uses the same term, σεισμός (seismos), in his retelling of the Stilling of the Storm (Matt. 8.24), so it may be that the terminology is simply characteristic of Matthew's dramatic style of narrative.

The difficulty in analyzing ancient texts for data relevant to scientific analysis is that there can be a certain etymological excitement in seeing a term likeseismos that is so recognizable to us because of its relationship to our terms likeseismic which are derived from it.  However, we have to use a little caution given that it is not a simple case of one-to-one mapping from our "earthquake" to theirseismos, just as our "leprosy" does not correlate perfectly to their λεπρός (lepros), and the related words.

In cases like this, a lot depends on context.  Williams et al (3-4) also work with Josephus's report of an earthquake in 31 BCE, which features details of destruction that make it sound major.  Indeed this event is their "'anchor' earthquake", helpful because Josephus dates it to the "seventh year" of Herod's reign (Jewish War 1.370).  Some caution may be necessary in relation to the precise dating at 31, e.g. Daniel Schwartz, in comparing the account in War its parallel in Antiquities 15.121, dates it in the Spring of 30 BCE. 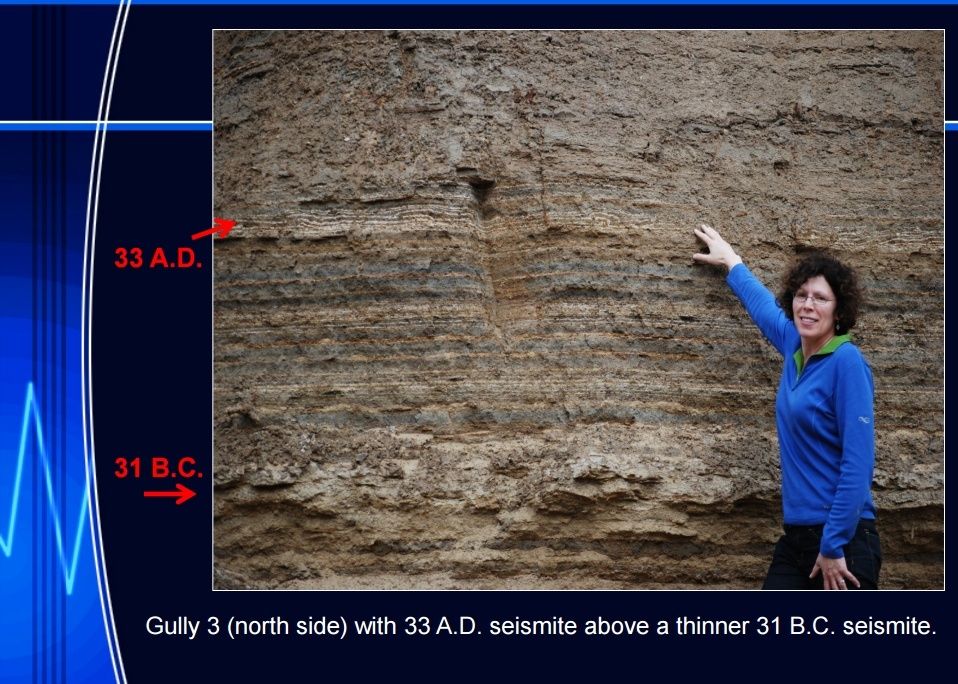