Intelligent Design, the best explanation of Origins » The catalog of life » Scientists discover secret to highly efficient swimming in some animals, such as jellyfish

Scientists discover secret to highly efficient swimming in some animals, such as jellyfish

Scientists discover secret to highly efficient swimming in some animals, such as jellyfish on Tue Nov 03, 2015 7:33 pm 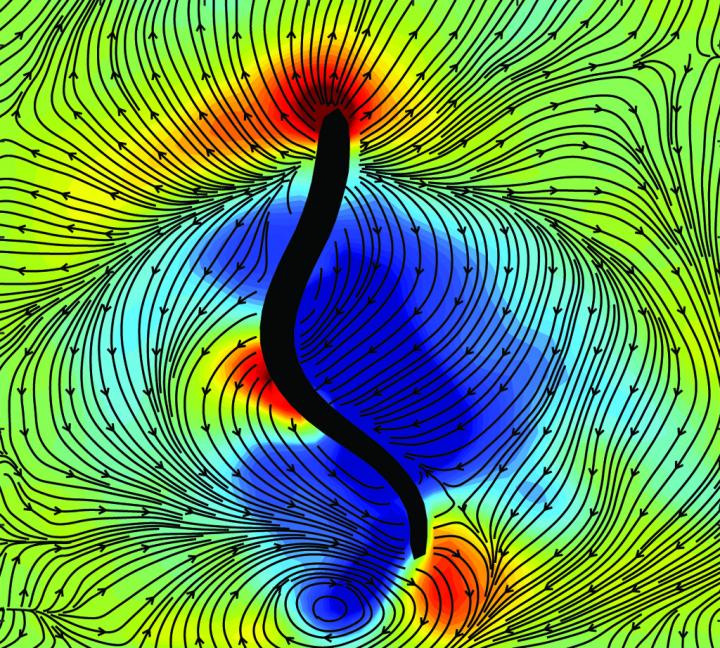 Scientists discover secret to highly efficient swimming in some animals, such as jellyfish
Snapshot of a lamprey (black outline) swimming in a water tank. Colors indicate low-pressure suction forces (blue) and high-pressure pushing forces (red) generated by the animal as it swims. Black lines and arrows indicate water flow …more
Previous studies have shown that jellyfish and eels can move using very low amounts of energy that would make a Toyota Prius jealous. In fact, these ocean denizens can go from point A to point B using less energy than any other swimmer, runner or flier ever measured. However the secret behind such amazing energetic efficiency has remained a mystery, until now.
A team of scientists led by Dr. Brad Gemmell, an assistant professor in the University of South Florida's Department of Integrative Biology, has revealed that these marine animals do something completely unexpected when they swim.

According to the research team, comprised of scientists from five institutions, understanding how animals move is essential to understanding their evolutionary history, their fitness and their ecological impact. Understanding how animals move so efficiently through water is also important to engineers who study bio-inspired design and take ideas from nature to make more efficient underwater vehicles. Experiments carried out to better understand the locomotion used by free-swimming jellyfish and lampreys, eel-like animals that move with undulating, wave-like body motions, has revealed that these animals move forward not by pushing against the water, but by sucking the water toward them.

"Until now, it has been widely assumed in the literature and the text books that animals swim primarily by pushing against the fluid to generate high pressure and move the animal forward," said Gemmell. "However, it turns out that at least with some of the most energetically efficient swimmers, low pressure dominates and allows these animals to pull themselves forward with suction. Given our findings, we may have to rethink our ideas about some of the evolutionary adaptations acquired by swimming animals and how we approach vehicle design in the future."

Their recent experiments, recounted in a paper just published in Nature Communications, aimed at better understanding lamprey and jellyfish locomotion by observing lampreys swimming through a tank of water containing tiny glass beads that were illuminated with a laser. The animals' swimming motion perturbed the beads in such a way as to enable visualization of the flow and timing of glass bead movement in concert with the lampreys' movements. Using high speed digital cameras that recorded movement in fractions of a second, the scientists were able to directly measure the 'hydrodynamic efficiency' of their swimming process.

They found that when lampreys swim using undulating motions they create a pocket of low-pressure water inside each bend of their body, and that the water ahead of the lampreys rushes in to fill the low-pressure pocket. The motion of the in-flowing water pulls the animals forward.

Given the breadth of existing literature in which it was previously assumed that animals swim by pushing on the fluid, the implications of this new perspective on animal swimming potentially reach topics as diverse as evolutionary adaptation, functional ecology and bio-inspired design.

"The new method to calculate pressure fields around freely swimming organisms allowed us to look at both high and low pressure contributions to locomotion," explained Gemmell. "This is when we found that low pressure or suction was actually the dominant means of moving the animals forward."

Although their body shape is very different from that of lampreys, the same principles observed in lamprey swimming were also observed in swimming jellyfish, with the same dominant role for low pressure near the animal's body.

The jellyfish example is especially valuable, said Gemmell, because the inherent unsteadiness of its swimming motion leads, at different points in the swimming cycle, to distinct manifestations of both the high pressure generation mechanism previously assumed to be dominant as well as the primary low-pressure, forward pull locomotion observed in the lampreys.

The research links closely to Gemmell's research interests in the role of animal-fluid interactions in marine environments and how these govern important biological factors, such as predator-prey interactions as well as large-scale ecosystem processes and evolutionary relationships. His work also investigates how organisms function in fluid environments, even evaluating the effects of environmental pollutants, such as oil spills, on marine animal life.

According to Gemmell and his co-authors, their study offers a new perspective on evolutionary adaptation and 'functional ecology,' but it also makes them think about how this new knowledge about the efficiency of the lamprey's suction-based swimming propulsion can be put to practical, biomimetics use in human technologies.

Intelligent Design, the best explanation of Origins » The catalog of life » Scientists discover secret to highly efficient swimming in some animals, such as jellyfish