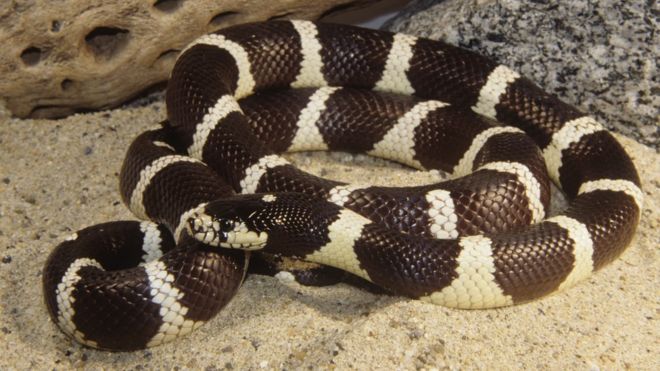 Scientists have discovered a layer of very well-organised fatty molecules on the belly scales of snakes, which could be the key to life on the slither.
Snake scales are slipperier on the belly than the back, but the reason for this difference is not yet known.
By revealing the molecular make-up of the scale surface, this study offers a new explanation for how snakes reduce friction on their underside.
It will be presented on Wednesday, at a symposium on the science of surfaces.
Lead author Joe Baio, a chemical engineer from Oregon State University, said the lubrication helps the snakes in two ways: it makes movement easier, but also reduces wear and tear.

"When snakes slide on the ground, how do they reduce friction and not scrape away their skin?" he said. "The coefficient of friction for the belly of the snake... is a lot lower than the top of the snake - so it's somehow reducing friction on its stomach side.
"But under a really high-powered microscope, the shape and morphology of [the scales] look identical."
Dr Baio is in San Jose to present his findings at the [size=16]AVS symposium. He told the BBC he is rather scared of snakes - but his interest was sparked by a conversation with zoologist Stanislav Gorb, at the same conference several years ago.
Together, they started to study the scales of the California kingsnake.
"I ran into [Stanislav] at the AVS conference a few years ago and we talked about this problem," Dr Baio said. Soon, packages of fresh scales were traversing the Atlantic from Prof Gorb's laboratory at the University of Kiel in Germany.
"As soon as the snake moulted he would send me scales, and I would use very surface-sensitive spectroscopy techniques that we've developed, to look at the outer couple of nanometres of the surface."
Using these techniques, Dr Baio was soon struck by "huge differences" between belly and back scales.
Both sets of scales have a thin film of grease on their surface, but on belly scales those lipid molecules are arranged into a very orderly structure. 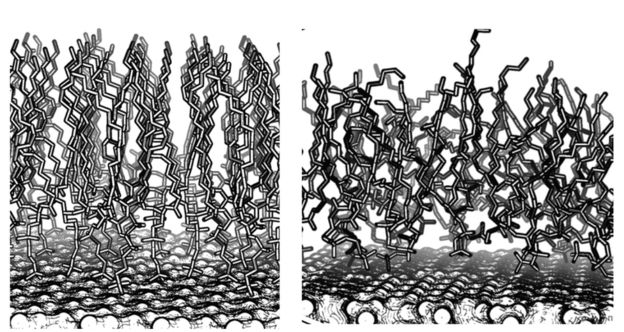 Image copyrightJoe BaioImage captionThis diagram illustrates a well-ordered (left) and disordered layer of lipid molecules
"It's extremely, extremely well ordered. It's not just some grease they picked up; it's there for a reason," Dr Baio said.
"I do a lot of other sorts of chemistry - including modifications for biological implants, for the human body. And to make the chemistry this well ordered is really hard."
They started with the California kingsnake, but Dr Baio said his team had already started working on other species, with similar results.
And now that they have detected this orderly lipid structure, they are planning experiments to test whether it is, in fact, the cause of reduced friction on the snake's belly. At the moment it remains an intriguing observation.
"The argument we're making is, everything else looks the same; the morphology and the roughness looks the same. The only thing we can find that's different, is the chemistry at the surface."[/size] 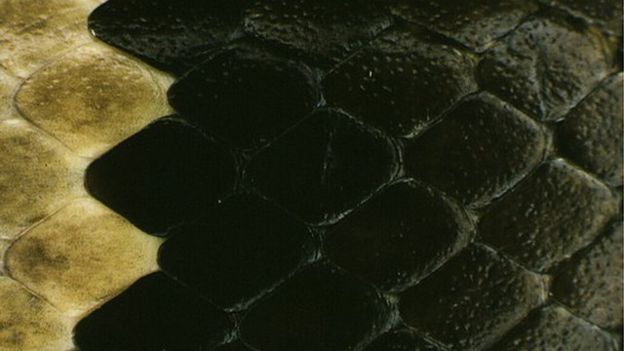 The source of the lubricating layer is also a mystery; it does not appear to wear off, so it might be constantly secreted by pores in the snake's skin - or the molecules might be stuck in place.
"Another possibility is that at the surface, these things are covalently attached. We haven't quite figured out the source," Dr Baio said.
Prof Bruce Jayne, a zoologist and snake expert at the University of Cincinnati, told BBC News he was unsure whether the lipid layer was the whole story. Many land snakes do, he said, show microscopic physical differences between the scales on their belly and elsewhere.
But he thought it was an interesting finding, nonetheless. "I have often thought that snakes with freshly shed skin feel just a bit different, but is not clear to me if this is because of a coating or wear."
If the lipids are not, in fact, playing a role reducing friction, he suggested they might help to stop the snake's scales from drying out.
Meanwhile, according to Dr Baio, the findings could help engineers produce new paints or coatings with very low friction, protecting surfaces from wear.
"You could make very slippery surfaces by mimicking what's going on in these scales," he said.
The AVS is running its symposium in San Jose until Friday. It is a member society of the American Institute of Physics, dedicated to the study of surfaces; it was formerly called the American Vacuum Society because high-vacuum environments were essential for such experiments.