Lobsters are master sniffers. In complete watery darkness they are able to smell and locate food, mates, or predators. This ability comes from a pair of antenna which they swing about to capture traces of odor molecules.

Traditionally it was thought that, unlike hearing, time was not a key factor in the sense of smell. However, it is noticed that a lobster olfactory neuron constantly discharges small bursts of electrical pulses. These signals may enable the lobster to pinpoint sources of small by determining the precise time difference between whiffs of odor coming from various directions. On the other hand, the lobster may actually be emitting and receiving reflected signals, somewhat like radar or sonar.


Question : how could evolution have evolved this amazing trait ? This is something that looks almost as invented for a science fiction film. Just amazing. Think about that. A radar that can send electrical pulses in order to detect smell from discance........

The details of lobster odor detection may hold the key to sensitive electronic sensors. Several universities and military branches are exploring a new generation of robotics which will sniff out landmines, gas leaks, harmful bacteria or toxic chemicals.

Question: How is it that these creatures are equipped with advanced technology for their survival? It is surely a testimony to intelligent design. As a bonus, their study helps us solve technical problems and generate new products. 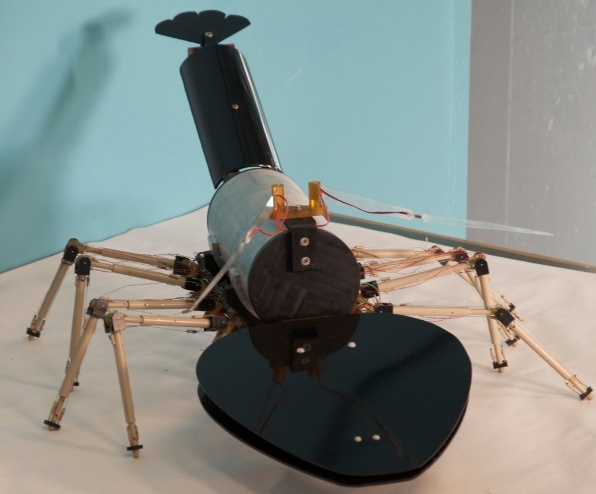 Biomimetic Robots
We are developing neurotechnology based on the neurophysiology and behavior of animal models. We developed two classes of biomimetic autonomous underwater vehicles (see above). The first is an 8-legged ambulatory vehicle that is based on the lobster and is intended for autonomous remote-sensing operations in rivers and/or the littoral zone ocean bottom with robust adaptations to irregular bottom contours, current and surge.

Scientists in Florida studying the way lobsters sniff around for food on the sea floor say they have found a clue to developing technology that could help soldiers detect landmines and hidden explosives from a safer distance than current technology allows.

A lobster's "nose" is actually a pair of hairy antennules that capture odor molecules that settle on the hairs and help the creatures locate an odor, researchers at the University of Florida said.

They are studying an olfactory neuron that emits bursts of electrical pulses, much like radar systems use pulses of radio energy to detect airplanes or thunderstorms.


The team's findings, published in the January issue of the Journal of Neuroscience, may provide hints on ways to improve the devices to detect landmines and other explosives, said Jose Principe, an electrical and computer engineer professor on the research team.

Current detectors "sniff out" explosive materials, but need a human handling the electronic nose to pinpoint the exact location, Principe said. A new device using a "lobster nose" could direct human handlers to the source from a safe distance.

For a lobster, each bursting neuron responds to a whiff at a different frequency, according to Barry W. Ache, a distinguished professor of neuroscience and biology and director of the University of Florida's Center for Smell and Taste.

Sensing the time between whiffs helps the lobster pinpoint the source, Ache said.

Computer modeling of the lobster olfactory cells helped the team understand how a lobster was extracting and processing information from the environment, Principe said.

"Our idea of smell is evolving," he said.

Principe said scientists have long understood that time plays a part in acoustics and vision but had not recognized the importance of time in smell.

"Amazingly you go to the lobster and you find cells that are associated with timing, that measure time. ... From these cells the animal is able to quantify the time since the last encounter with a smell," Principe said.

The findings also add to knowledge about the sense of smell in people and in other animals.

Principe said he expects potential commercial applications to be available in the near future.

"You find a principle and then you out it in engineering terms to create our devices," he said.

Admin
Posts : 4924
Join date : 2009-08-09
Navy Looks to Lobster for Smelling Technology
Lobsters have noses, too; small organs called aesthetacs on the tips of their antennae that sweep through the water.  If you have watched lobsters carefully, you may have noticed that the downstroke is faster than the upstroke.  There may be a reason for this, and scientists funded by the Office of Naval Research are trying to find out, says EurekAlert.  By studying lobsters, the Navy hopes to find better ways to sniff out underwater explosives.  The team built a robotic lobster on a real lobster exoskeleton, but outfitted it with their own steel antennae with electronic sensors and tried to mimic the motion of a live lobster.  They found that the twitching motion apparently provides the lobster with a quick high-resolution map of the odor plume coming its way, and the slow upstroke may give it time to analyze the data without disturbing the pattern set up on the sensors.  The beginning of the next downstroke resets the sensors, and provides an update on the source of the odor.  The report states with admiration, “For a lobster living on the ocean floor, the chemical trails left by prey, predators, mates and competitors must make a confusing tangle – each filament of odor intertwining with the others until discovering the source of any one of them starts to seem as impossible as untangling a ball of liquid yarn.  But somehow the lobster does it.”

How many times have we seen human engineers getting their inspiration from designs in nature?  Notice how what looks on casual observation like just a nervous twitching by the lobster actually has a very real function.  Human robotic engineering is making us aware of the robots all around us that are light-years ahead of us in design.