the Biblical account of the Exodus contains many tiny details that place it within a distinct historical and chronological context. Those who ignore this evidence refuse to give the Biblical record a fair hearing.

For instance, in the events leading up to the Exodus, the book of Genesis records that Joseph’s brothers sold him for 20 shekels to slave traders who took him from Canaan to Egypt (Gn 37:28). Egyptologist Kenneth Kitchen notes some of the flaws in the logic of those who reject the Biblical Exodus or assign it to unnamed writers many centuries later. He notes that the price of 20 shekels is the price of a slave in the Near East in about the 18th century BC...If all these figures were invented during the Exile (sixth century BC) or in the Persian period by some fiction writer, why isn’t the price for Joseph 90 to 100 shekels, the cost of a slave at the time when that story was supposedly written?...It’s more reasonable to assume that the Biblical data reflect reality in these cases (1995:52).

The date of the Exodus can be accurately calculated since the Bible mentions in 1 Kings 6:1 that the fourth year of Solomon’s reign was “the four hundred and eightieth year after the children of Israel had come out of the land of Egypt.” Surprisingly, there is scholarly agreement about the dates of Solomon’s reign, placing his fourth year in the 960s BC. Subtracting 480 years takes us back to a date for the Exodus in the 1440s BC.

Another Biblical reference used to date the Exodus is found in Judges, where Jephthah tells the Ammonites that Israel had been in the land for 300 years (Jgs 11:26). Again, there is acceptance among the experts that Jephthah’s victory over the Ammonites took place around 1100 BC. This would place the arrival of the Israelites in Canaan near 1400 BC, precisely 40 years after the Exodus. Thus both Biblical dates for the Exodus agree.


Does the ancient Egyptian document known as the Ipuwer Papyrus describe the events recounted in biblical story of the Plagues of Egypt?
The Plagues are the ten catastrophes imposed on ancient Egypt by Yahweh to convince Pharaoh to let the Israelite slaves go as recorded in the Torah (Exodus, chapters 7–12).

The Plagues of Egypt imposed on ancient Egypt by Yahweh to convince Pharaoh to let the Israelite slaves go… are they fact or fiction?

The Ipuwer Papyrus is a single papyrus holding an ancient Egyptian poem, calledThe Admonitions of Ipuwer. It describes the affliction of Egypt by natural disasters and by a state of chaos in which the poor have become rich, and the rich poor, with violence, famine and death are everywhere. A symptom of this chaos is the lament that servants are leaving their servitude and acting rebelliously.

The date for the composition of The Ipuwer Papyrus is unknown. The papyrus itself (Papyrus Leiden I 344) is a copy made during New Kingdom of Egypt (c. 1550 BCE–c. 1069 BCE). It is in the Dutch National Museum of Antiquities in Leiden, Netherlands. There is no agreement on the date of the original composition of the poem. Some scholars have suggested a date between 1850 BCE and 1600 BCE.
The renowned British Egyptologist Sir Alan Gardiner (1879-1963) translated the Ipuwer Papyrus into English in 1909. He believed that the text contained historical descriptions of current and past events.
Some biblical researchers have interpreted the document as an Egyptian account of the Plagues of Egypt and the Exodus in the Torah. The Ipuwer Papyrus is often cited as proof for the Torah account by biblical scholars. However, most Egyptologists reject the association of the Ipuwer Papyrus with the Exodus as describing the same event.

Dr. Roland Enmarch, Lecturer in Egyptology University of Liverpool and author a new translation of the Ipuwer Papyrus, notes: "the broadest modern reception of Ipuwer amongst non-Egyptological readers has probably been as a result of the use of the poem as evidence supporting the Biblical account of the Exodus." Commenting on such attempts to draw parallels, he argues that "all these approaches read Ipuwer hyper-literally and selectively" and points out that there are also conflicts between Ipuwer and the biblical account.
Enmarch suggests that "it is more likely that Ipuwer is not a piece of historical reportage and that historicizing interpretations of it fail to account for the ahistorical, schematic literary nature of some of the poem’s laments."
On a literal reading, there are similar to aspects in the Ipuwer Papyrus to the Exodus account of the plagues of Egypt.


Comparison of the Ipuwer and Exodus Texts

Enmarch examines "the most extensively posited parallel," which is the river becoming blood. He insists that it should not be taken "absolutely literally" as a description of an event but that both Ipuwer and Exodus are metaphorically describing what happens at times of catastrophic Nile floods when the river is carrying large quantities of red earth.
It has also been suggested that the mixing of bacteria with the red earth could conceivably affect the oxygen balance of the Nile’s waters, resulting in the killing off of the river’s fish.
Exodus 7:20-21: “[Moses] raised his staff in the presence of Pharaoh and his officials and struck the water of the Nile, and all the water was changed into blood. The fish in the Nile died, and the river smelled so bad that the Egyptians could not drink its water. Blood was everywhere in Egypt.”
Ipuwer Papyrus (IP): Indeed the river is blood, yet men drink of it. Men [shrink] from human beings and thirst for water.
Below: Red-tide algea, River Nile

Consider the following additional parallel passages...
Exod. 9:6: “All the livestock of the Egyptians died, but not one animal belonging to the Israelites died.”
IP: “Indeed, all animals, their hearts weep; cattle moan because of the state of the land.”
Exod. 9:23: “When Moses stretched out his staff toward the sky, the LORD sent thunder and hail, and lightning flashed down to the ground. So the LORD rained hail on the land of Egypt.”
IP: “Indeed, gates, columns, and [walls] are burnt up… Behold, the fire has gone up on high, and its burning goes forth against the enemies of the land.”
Exod. 9:25: “Throughout Egypt hail struck everything in the fields—both people and animals; it beat down everything growing in the fields and stripped every tree.”
IP: “Indeed, trees are felled and branches are stripped off.”

Above: Locust plague in Queensland, Australia in 2010
Exod. 10:15: “[The locusts] covered all the ground until it was black. They devoured all that was left after the hail—everything growing in the fields and the fruit on the trees. Nothing green remained on tree or plant in all the land of Egypt.”
IP: “Neither fruit nor herbage can be found… everywhere barely has perished.”
Exod. 10:22: “So Moses stretched out his hand toward the sky, and total darkness covered all Egypt for three days.”
IP: “[The land] is not bright because of it.”
Exod. 11:5: “Every firstborn son in Egypt will die, from the firstborn son of Pharaoh, who sits on the throne, to the firstborn son of the female slave, who is at her hand mill, and all the firstborn of the cattle as well.”
IP: “Indeed men are few, and he who places his brother in the ground is everywhere… Indeed [hearts] are violent, pestilence is throughout the land, blood is everywhere, death is not lacking, and the mummy-cloth speaks even before one comes near it.”

Gary Greenberg, President of the Institute of History, Archaeology and Education concedes, “to the extent that one
believed the Hebrew God caused these bad times, one was inclined to let him take the credit.” Nevertheless, he insists that
"there is nothing miraculous about the conditions described, nor is there any evidence from Egyptian records that the
firstborn child of each Egyptian family died on one night."

Dr. James K Hoffmeier,professor of Old Testament and Ancient Near Eastern History and Archaeology at Trinity Evangelical Divinity School in Deerfield, Illinois argues that the use of mythological language and images in a biblical narrative of the plagues of Egypt does not mean that a fictitious event is being described.
"In the end," he writes, "those who consider the Exodus stories historicized myths, folklorist tales, or legends rest on assumptions about the nature of the literature that cannot be proven.”
There are remarkable similarities between the catastrophes described in the Ipuwer Papyrus and the biblical narrative of the Plagues of Egypt. Are these records of precisely the same events? This is unlikely since the probable date of the composition of the Papyrus, 1850 BCE and 1600 BCE, precedes the date of the Exodus by centuries.
The very earliest date for the Exodus proposed by the most conservative scholars is 1450 BCE. Scholars in the tradition of the celebrated biblical archaeologistWilliam F. Albright (1891-1971) propose an alternative, "late" Exodus around 1200-1250 BCE.
John Van Seters, Distinguished Professor Emeritus at the University of North Carolina, suggests that an author he calls the Jahwist (J) wrote the base-story of the Exodus in the 6th century BCE. This was later expanded by the Priestly school of writers (P) in the redacting of the Torah. If Dr. Van Seters is correct, then the Ipuwer Papyrus may precede the biblical text by as much as a millennium.
The biblical account of the Plagues of Egypt reflects events described in the Ipuwer Papyrus. It is certainly possible that the J and P writers of the Torah may have borrowed from the Papyrus certainly in terms of form if not strictly in content and purpose. The Torah undoubtedly reflects the same genre in ancient Near Eastern literature, but this does not negate the probability that the Plagues narrative has dome basis in actual events.

Admin
Posts : 4940
Join date : 2009-08-09
One of the frequently ridiculed passages in the bible is about Talking snakes and Balaams talking Donkey. But there is hard evidence that Balaam the prophet is a historical figure.

THE POPULAR HANDBOOK OF ARCHAEOLOGY AND THE BIBLE 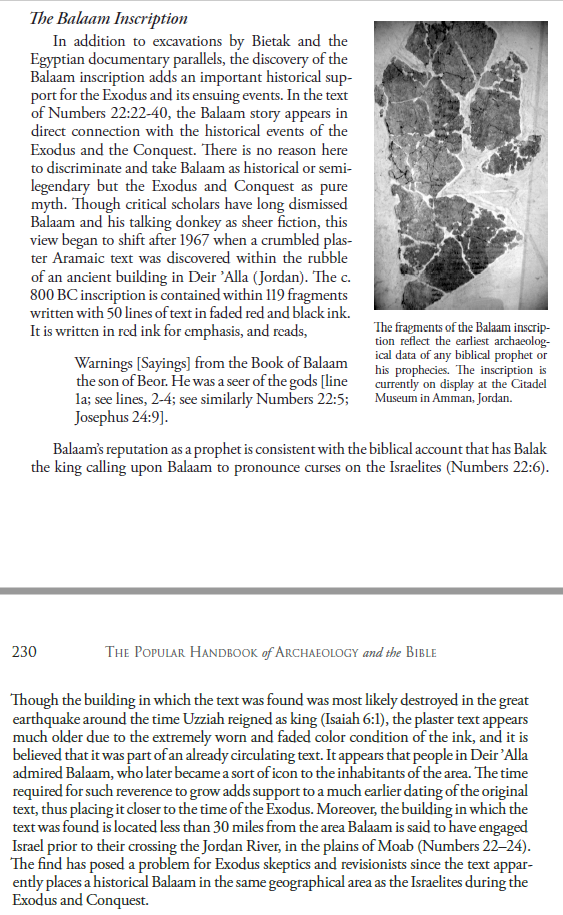 Re: Evidence of Exodus